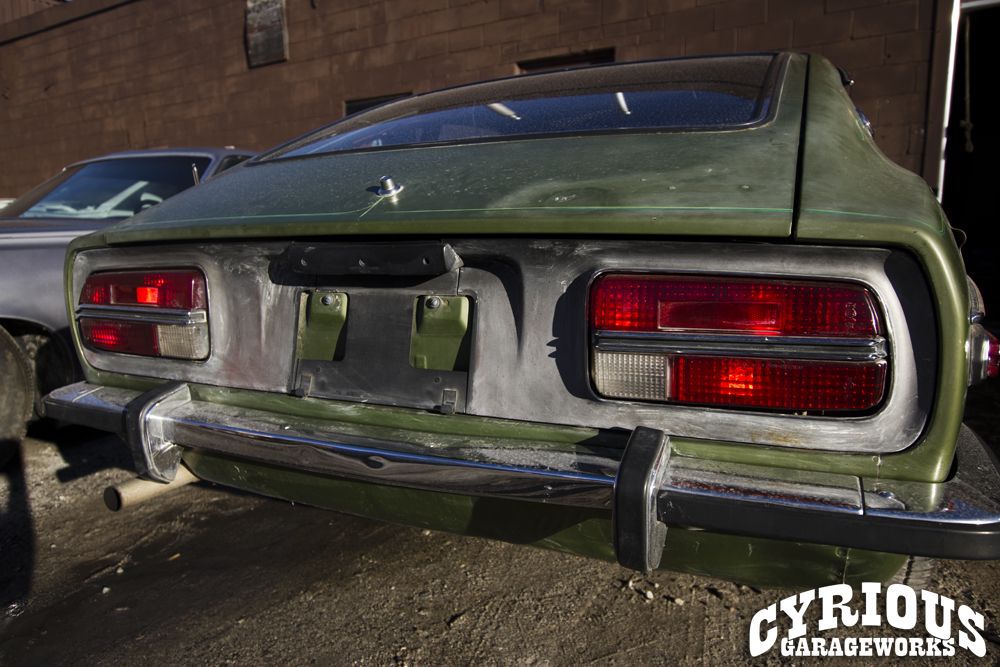 We’ve just gotten this car lined up at the shop and ready for a full restoration. We’re going to take you through as many of the stages as we can throughout this build! Of course, the first (and nearly most important) step to any ground-up restoration is to get the right car.

After plenty of careful thought and consideration, we wound up with this beautiful example of a 1972 Datsun 240z Coupe! We had spent lots of time looking for the perfect car to get this project started. A big part of our requirements to start with were that the floors were either original, or at least repaired with some amount of care and quality. The problem with a car that’s had floors repaired is that there’s always a pretty good chance that there was other rust on the car that also needed repair. If the floors received shoddy workmanship, one can usually be fairly sure that the repairs done elsewhere received equal amounts of care.

We decided initially to try to find a car locally. The thought was that if we could find one that wasn’t terribly rusty and relatively cheaply priced, we’d be able to save a bit on all of the legwork and costs of getting a car shipped up from the US. I should mention that buying cars from the US comes with it’s own set of pitfalls that we were reluctant to deal with. With a car in the US being so far away, one is tasked with making sure they ask the right questions of the seller, and try to get as many pictures as possible to ensure that the car will be in as good of a shape as you want it to be. Even so, it’s still a bit of a crapshoot, so we weren’t in a hurry to start off looking at cars in the States.

With that being said, however, it didn’t take long for our hopes of finding a local 240z to be dashed. Many of the local 240zs had already been restored, which wasn’t something we were looking for. Once again, the issue being that when you buy a car that somebody else has already restored, there’s no guarantee on the quality of workmanship done during the restoration; all it takes is a little bit of shoddy work done to a car to make the entire thing relatively worthless. A great example is a car that actually was in pretty good shape: the floors had been patched, but they had done a fairly good job on it, and the rest of the car looked to be in a pretty good condition. We were not long from potentially buying the car until we noticed a detail that we had initially missed: the owner had cut a sunroof into the car. Not only was there a sunroof, but a particularly ugly one at that. As this was never an option for this car, and finding 240z roofs are about as hard as finding a 240z, we had to keep looking for another one.

After looking at several overpriced, rotten local 240zs, it became apparent that we were going to need to go south of the border to find a car actually worth restoring. A few Google searches and phone calls later, and we had come across this particular 240z, hailing from Oregon. As mentioned earlier, we asked as many questions as we could without annoying the guy selling the car, and got as many pictures as we could from him. We were fairly confident that the car would be good, but were nonetheless on pins and needles as we finalized the purchase.

Once the car arrived, however, any doubts were instantly washed away. It’s rare for me to get goosebumps upon seeing a car (in stock form, no less), but with this one it was hard not to. I don’t think I’ve ever seen a 70’s era vehicle with original paint all in one piece. Floors? Good. Quarters? Good. Rockers? Good. Visibly not a single piece of soft metal on the car. We wound up having to pay a little bit extra in order to get the car shipped up from the States, and it was a little more expensive than some of the rust-boxes we were looking at here in Ontario, but the result was truly amazing. This was a perfect example of why sometimes spending more money upfront is better, because it makes it so that you don’t necessarily have to spend money fixing the car, and can jump right into improving the car!

So, now that we’ve gotten ourselves a good starting point to work from, the next stage is disassembly.  We’re going all out on this build, so this car will need to be disassembled down to what is basically a bare rolling chassis. Check back in soon for the next update on this car!