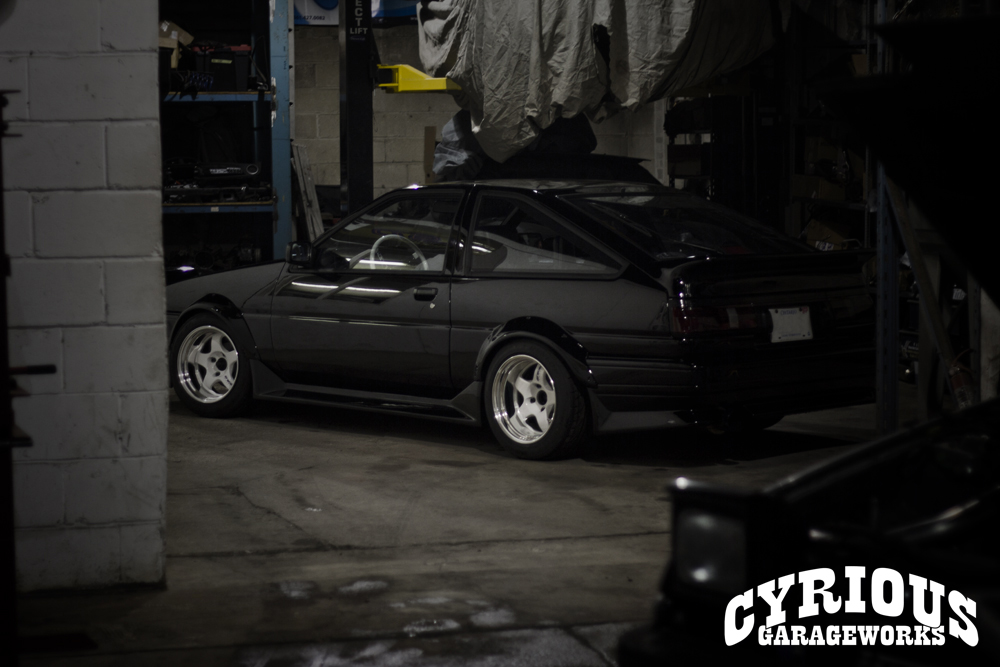 Fast-forward through a bunch of hours of sanding and a paint-job and this is how it looked! This stage is kind of a moment of truth as far as the bodywork is concerned… any kind of imperfections that may have been missed will show up in a glossy paint job (especially black). Fortunately there were no problems with the paint, so we were able to proceed with the completion of this project!

And here it is, in all its completed glory!

Plenty of work was done under the hood, with all the necessary wiring connections made and all vacuum hoses unplugged. A few other small details were changed to tidy the appearance, such as a shorter throttle cable without cruise control which removed a lot of unsightly messy stuff. Also, the addition of the velocity stacks completes the ITB setup on this car, and really just looks better overall.

The wheels of choice for this build are one of our favourites here at Cyrious Garageworks: Work Meister S1Rs with a set of Dunlop Direzzas wrapped around for good measure! Really, you can’t go wrong with Meisters!

The stance on this car made it necessary to install a set of fender flares which definitely gives the car a bold look, at the same time as not being as aggressive as a full over-fender. The stance of this car is achieved with HSD Coilovers, Megan inner tie-rods, and Techno Toy Tuning 5-Link and tension rods.

An HKS Titanium muffler makes it so that this car has a wicked exhaust tone, but is not quite as loud as one of our straight pipe exhausts, which should hopefully minimize any kind of difficulties with the authorities.

Taking a quick peek inside you can see that things have been left to be look mostly original, although a few details once again are added to give the car a bit more of a sporty feel. The TRD pedals play a big part in giving this interior a sporty feel, as well as the addition of a Mooneyes bright white steering wheel, to match the Work Meisters on the outside.

Of course if the driving starts getting really serious, there’s a Nardi steering wheel ready and waiting in the back seat…just in case.

Of course it’s hard to build a JDM inspired AE86 without the inclusion of TAKATA racing seat belts to keep both the driver and the passenger firmly attached to their respective seats.

One last thing to take note of is the stealthy addition of an original TRD Water Temp gauge. As a bit of a sought after part to AE86 enthusiasts, this is one little detail that speaks to the coolness of this car!

Last but not least for the interior is the battery relocation! Batteries just aren’t particularly good looking, and in an AE86 they’re mounted in such a way that it’s always in the way in the engine bay. So to both give a tidier look in the engine bay as well as make things more accessible, we decided to move the battery into the trunk.

This car is truly enjoyable from just about any angle. No matter what way you look at it, this car looks damn good!

We hated seeing her leave…but we loved watching her drive away! We were happy to produce what is an absolutely awesome AE86 for a fellow enthusiast, and can’t wait to see this car tearin’ up the tracks in the coming spring!