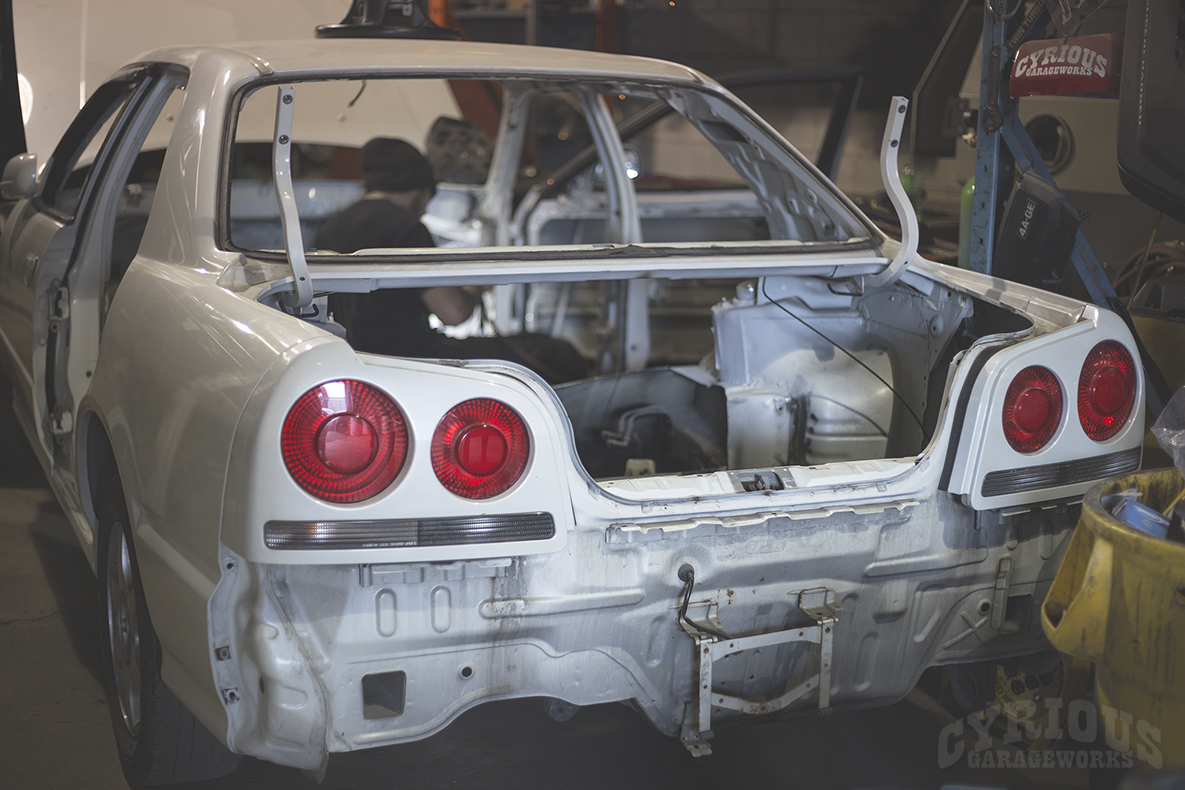 When you talk about iconic JDM cars from the 90’s to the early 00’s, you will inevitably bring up the Nissan Skyline R34. Often referred to as “Godzilla”, the R34 Skyline has a reputation steeped in racing and motorsports culture. The most sought after R34s can go from anywhere between $70k to $100k even now, if it’s a 2-door GT-R with all of the bells and whistles. Though iconic and instantly recognizable the R34 GT-R may be, there was another R34 out there that has it’s own motorsports following, the BNR34, or the 4-door sedan version. Though it may have a bit less of a straight up racing pedigree being a family sedan, this platform still has plenty of hours at the race track under its belt, having been popularized as a drift car by none other than Ken Nomura in the early years of D1GP in Japan.

And of course, we wouldn’t mention any of that if we didn’t have a BNR34 that was dropped off at our shop with a long list attached to it to get it prepped for some competitive drifting action! Interestingly, many who would visit the shop actually didn’t recognize this vehicle until seeing the trademark tail lights. This is possibly due to the fact that importation laws prevented these cars from being imported widely in America and Canada until just recently, so it’s not one that most people are familiar with. First thing on the work list were some structural panels that were removed that would render the car illegal to enter into most racing series (Note: cutting into the A pillar or B pillar on a race car is bad. Don’t do this). After that, chassis prep and roll cage!

That’s the brunt of the chassis fabrication completed! As this car is a four door sedan, it required a little bit of a different cage design from what we’re used to with putting cages into sports coupes. A few extra bars were requested over and above our usual drift spec cage which changed things a little as well, but the end result is a cage that looks nice, and will perform well in the event of some contact on the race track. As we hinted at in the title though, this build was about more than just a roll cage! Though the obvious and most common choice of engine for a Skyline build is to use a Nissan RB25 or RB26, it’s not necessarily the most practical engine for a drift car in North America, as it was never actually sold in any cars in North America. On the contrary, the Toyota 2JZ engine has long been a favourite in drift platforms from Nissan S-Chassis to Toyota GT86s. Not only has the aftermarket been strong in Japan for those engines, but even the North American aftermarket support has been able to keep up with demand, as many of the 2JZs were sold over here in various sedans. So, much to the dismay of Nissan enthusiasts everywhere, this R34 would be receiving a Toyota 2JZ as it’s new heart transplant. And, because racecar, we installed a fuel cell and a rear mounted radiator.