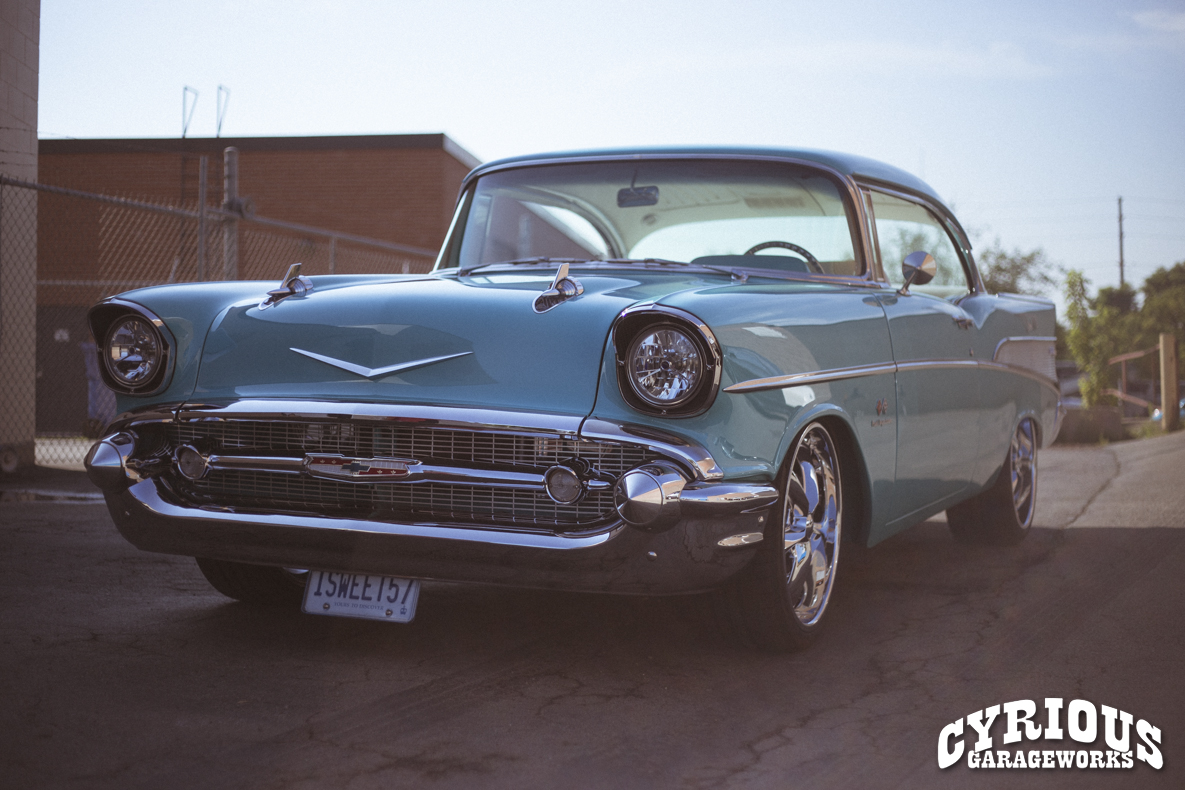 The 1957 Chevrolet Belair is quite possibly one of the most iconic cars of all time. It’s very likely that you could carry a picture of this vehicle to any corner of the world and have somebody there know what you’re on about. Whether it’s the instantly recognizable tail fins, the chrome rockets on the hood, or just the overall look and shape of the car; it all just seems so familiar!

With the 57 Chevy being as popular as it was, it was the kind of car that people modified back then just as much as they do now. With that in mind, it’s probably almost more common to see a 57 Chevy that’s been modified instead of one that’s showroom original. This particular build is one of those that had already been modified. Now, some people see the word “modified” and think that maybe this vehicle had wheels done, or some fresh paint or something like that. In this case, those people would be wrong.

This car had been customized from head to toe. The shop that originally built this car would’ve had a lot of hours into all sorts of details, particularly the bodywork. Just about everything on the car is painted, and anything that isn’t painted is chromed, with lots of pinstriped accents to boot. That being said, all of the nice details and touches that make the exterior look so good are tied together with some things that are maybe a little bit questionable.

One of the most immediately noticeable things is that the brake master and booster had been relocated in an effort to clean up the engine bay (or because it wouldn’t fit). A novel idea, but they had decided that the best place for it would be to hide it under the front driver’s seat floor. This made it so that the brake pedal was more similar to that of a golf cart than an actual car, coming from the floor instead of the firewall. Additionally, in doing so they made it nearly impossible to fill the brake master. In order to get around that issue, they decided that the best course of action would be to saw a hole in the floor and cover it with a small panel. Of course, there’s still one glaring issue there: there was a carpet glued on top of the floor. So in order to effectively fill the master, one would have to rip the carpet up (without ruining it), and then re-glue it when it was done. It quickly became clear that this car was built more to be looked at than driven. Our mission was to put both drivability and looks on a more even footing.

The chromed and painted Small Block 350 wasn’t gonna cut it for a driver’s car either, so that would also have to come out. Along with it, the exhaust would be removed, which really seemed to be more of an afterthought than being built to the car. In its place would go an LS3 Crate engine backed by a TKO transmission with a new custom exhaust.

Another thing that stood out to us was the running of brake and fuel lines. With so much attention being paid to detail in some spots, it seemed odd that they would sloppily sling rubber fuel hose to the brake line which was, in some spots, hanging freely from the body.

The Budnik wheels, though still a timeless design, give this car a bit of an understated look. We decided that it’d be nice to swap ’em out for something with a bit more flash.

Lastly, the interior definitely was in need of an update. Namely, the carpets. Though the thick seafoam heavy pile didn’t look terrible in there (depending who you ask), it really was better suited to being on the floor of your grandmother’s bathroom than on the floor of a custom ’57.

With all that said, it’s time to get rippin’ into this thing!