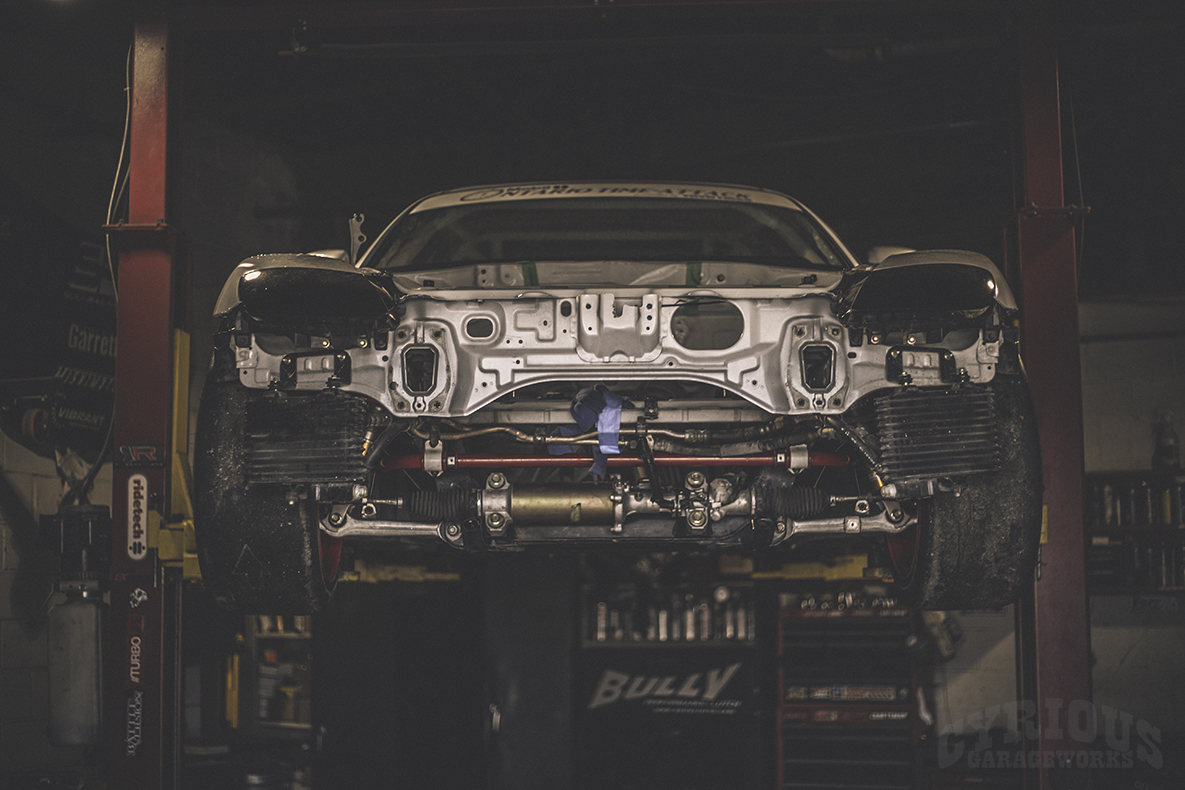 Yes, if you read the title, you read it right. We were just having another ho-hum day here at Cyrious Garageworks when we got the call from Steve who had decided that he wanted to leave his old rotary engine in the past and replace it with a stout, reliable Honda F20C. Needless to say our reaction was “Hells yeah!!” and the gears were officially turning! 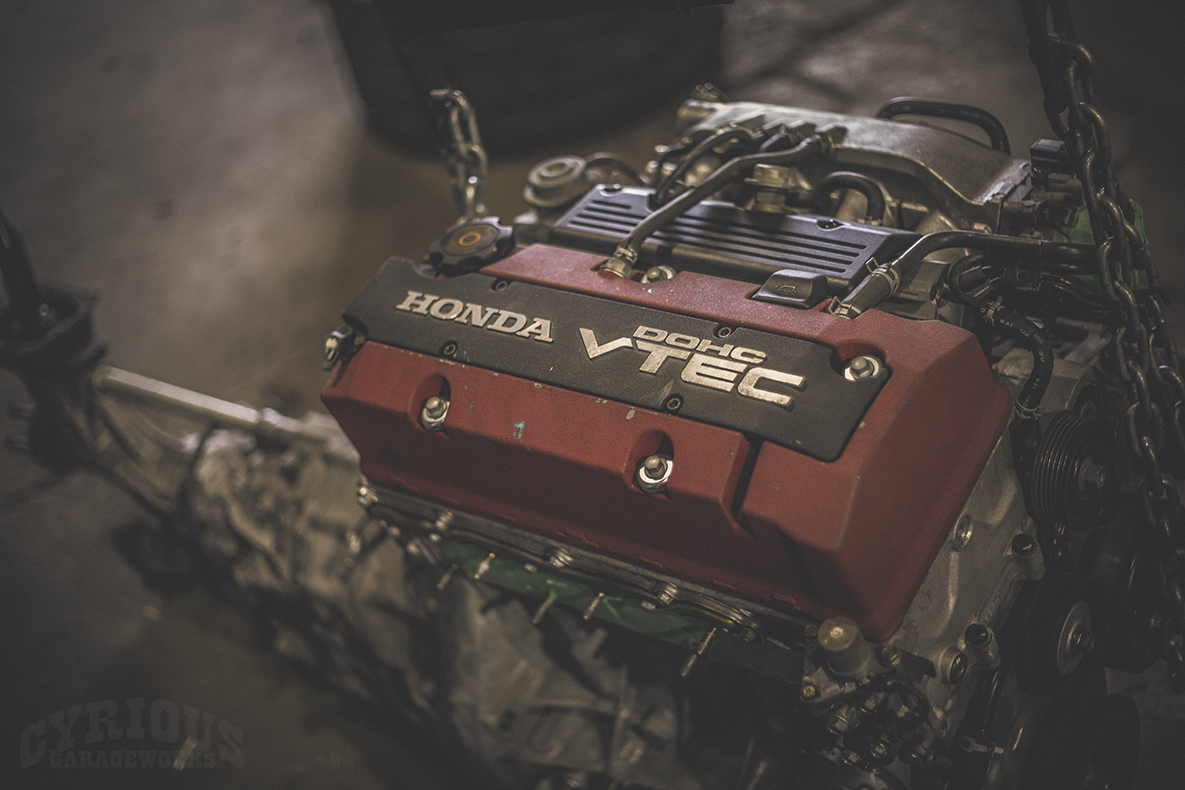 The indomitable Honda F20C. This engine is a popular swap for many different FR applications for a number of reasons, reliability being a major one. Being a compact 4 cylinder engine, it fits in just about anything, and has characteristics very similar to the engines that it often replaces, while being far more advanced mechanically. So with all that being said, people swap LS V8s into RX8s all the time, how hard could it be? 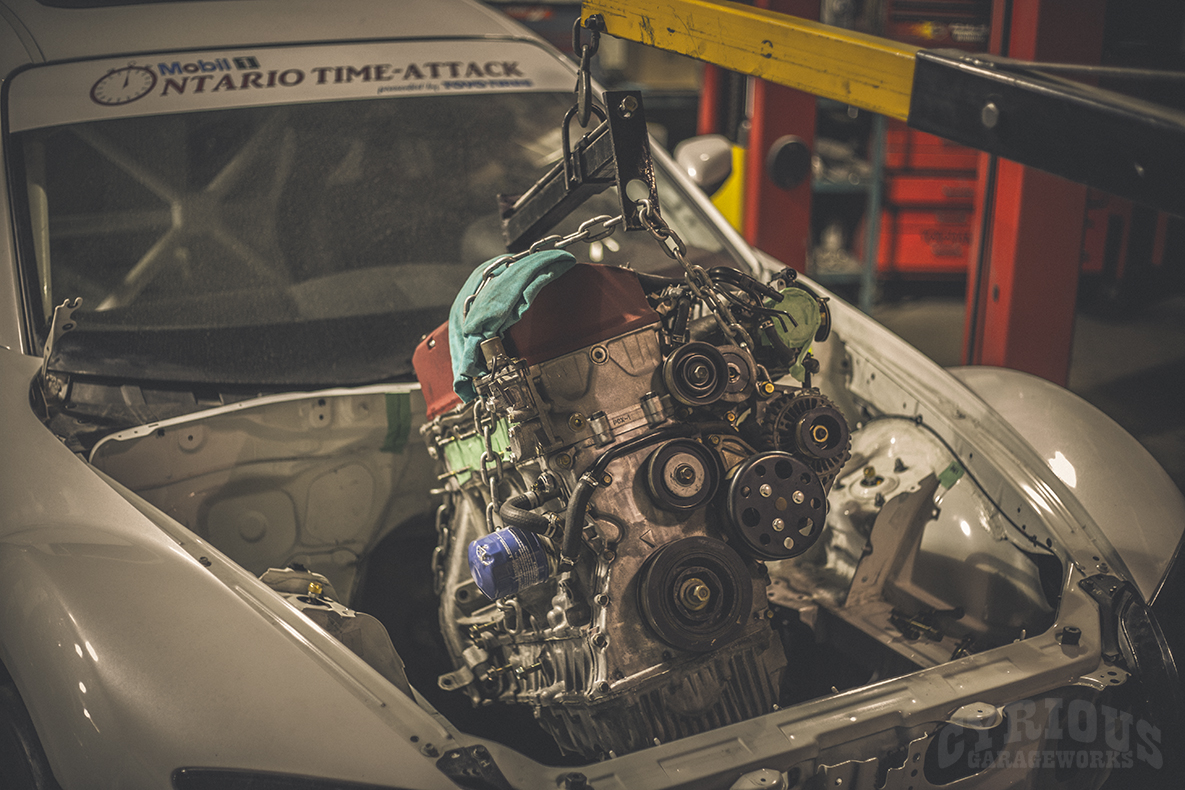 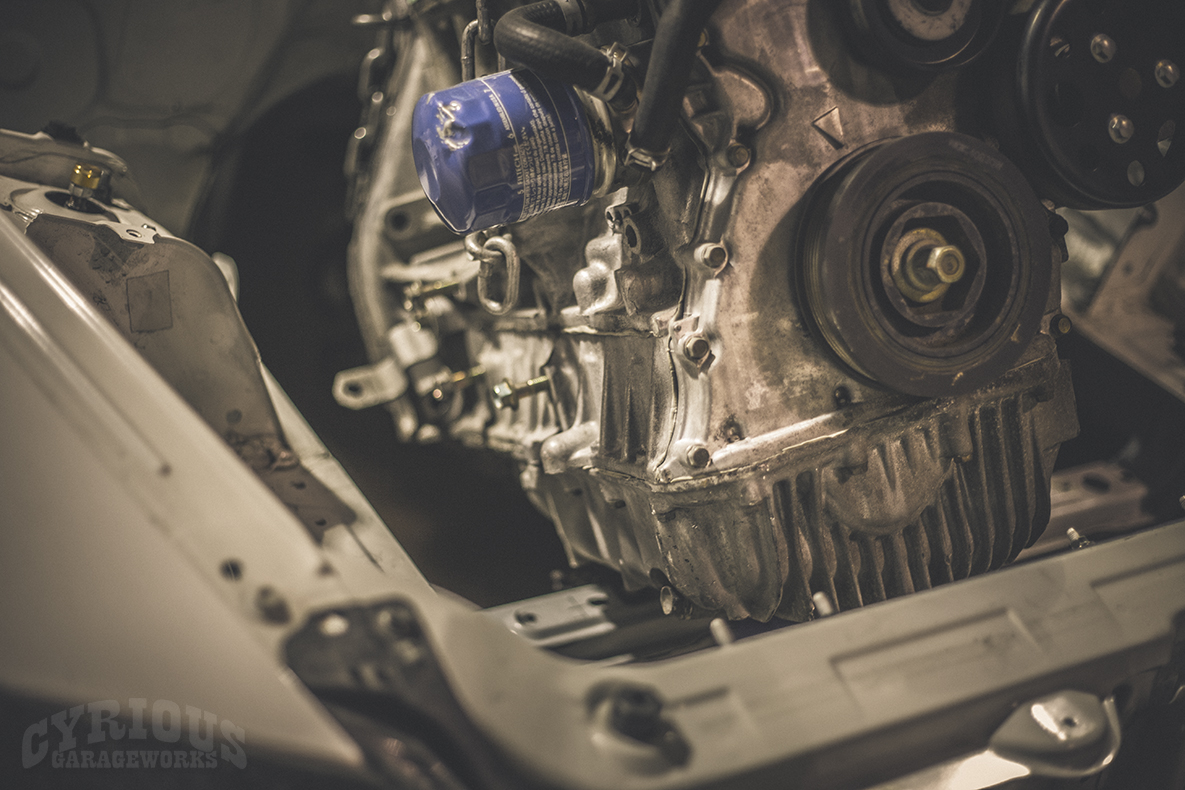 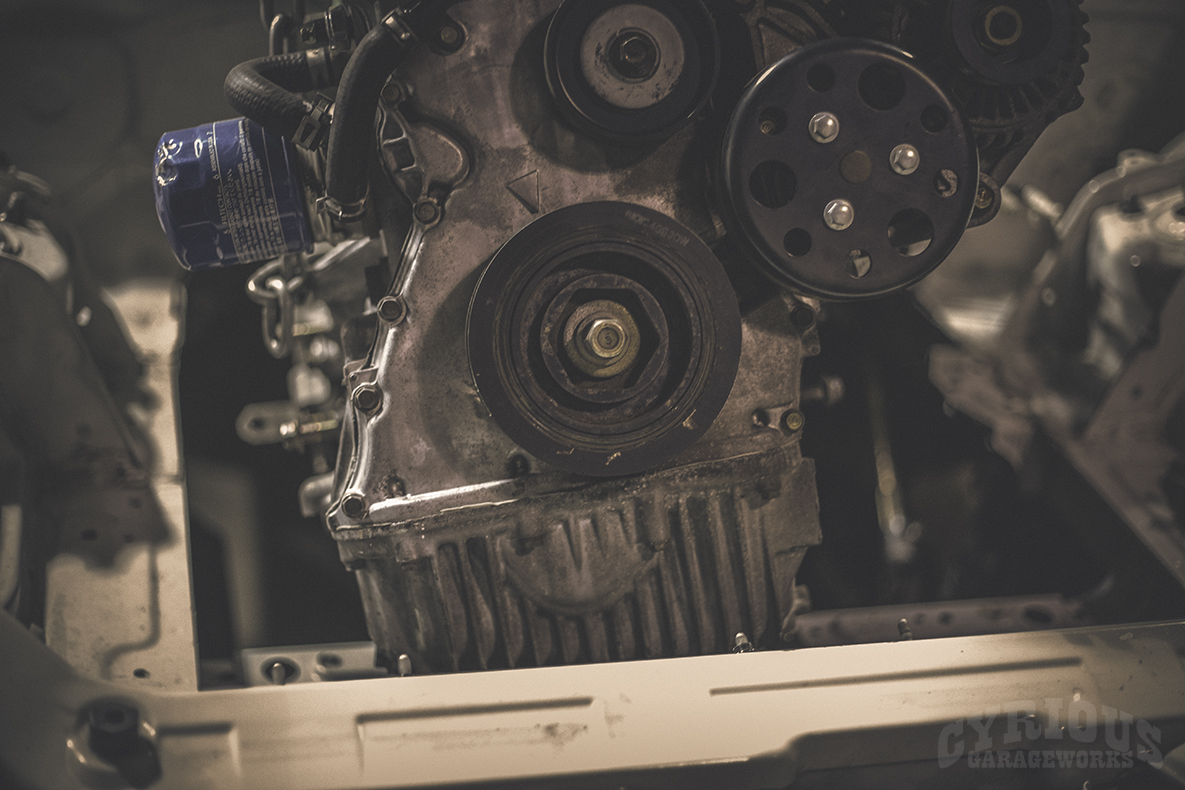 …huh. We kind of had a feeling that this would happen, but it still feels weird when a compact 4 cylinder engine is a tight fit in a car. Now that we knew what we were up against, it was time to get out the saw and perform some surgery. 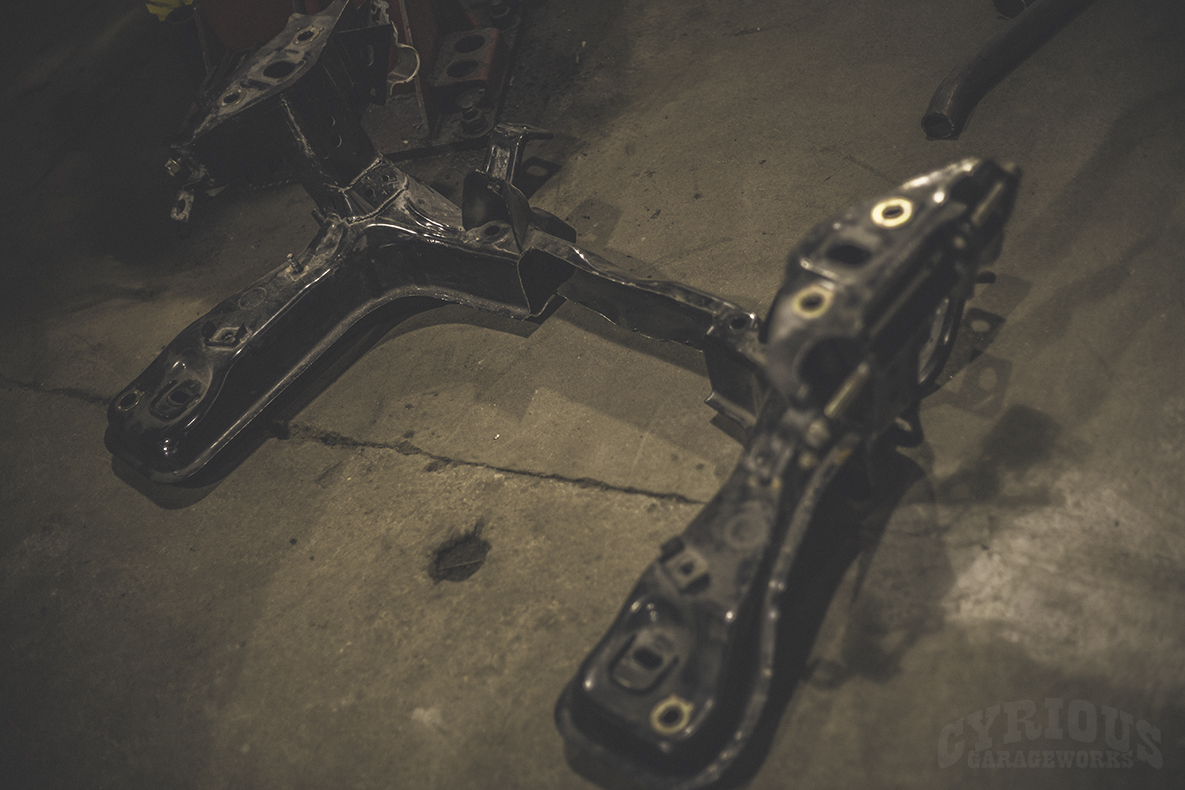 The first incision made was to the factory crossmember. Though that may be a sizable chunk missing from the structure, it’s actually a fairly conservative cut to start. When it comes to cutting into the factory stuff, it’s often a good idea to take it a little bit at a time so as not to take too much out and render the part completely useless; it’s much easier to cut out a little at a time than it is to try to add metal back in when you’ve taken too much out. 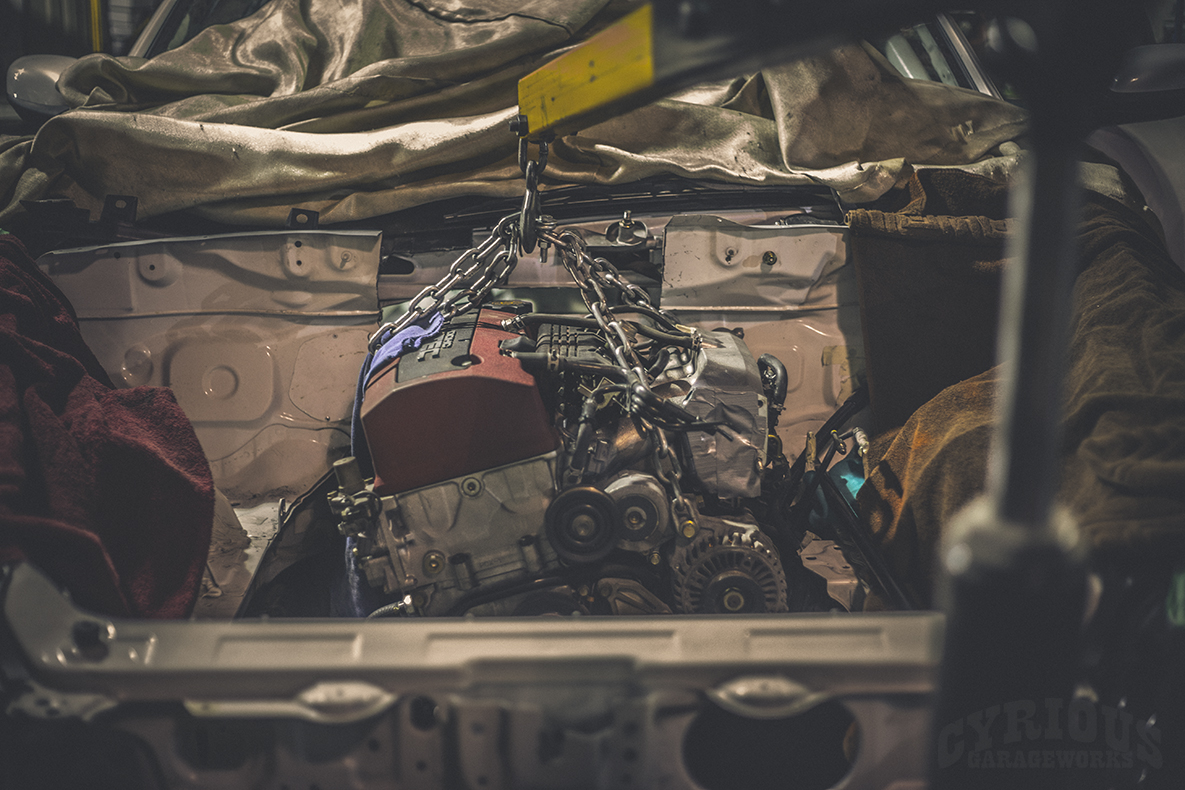 Next up on the chopping block was the firewall. We try to avoid cutting into the firewall whenever possible, as it’s good to leave such an integral part of the structure intact as much as you can. With this swap, however, this was the only solution. Since the RX8 is designed for a Rotary engine that’s even more compact than a 4-cylinder, it doesn’t leave a lot of room behind the front crossmember to mount the engine. 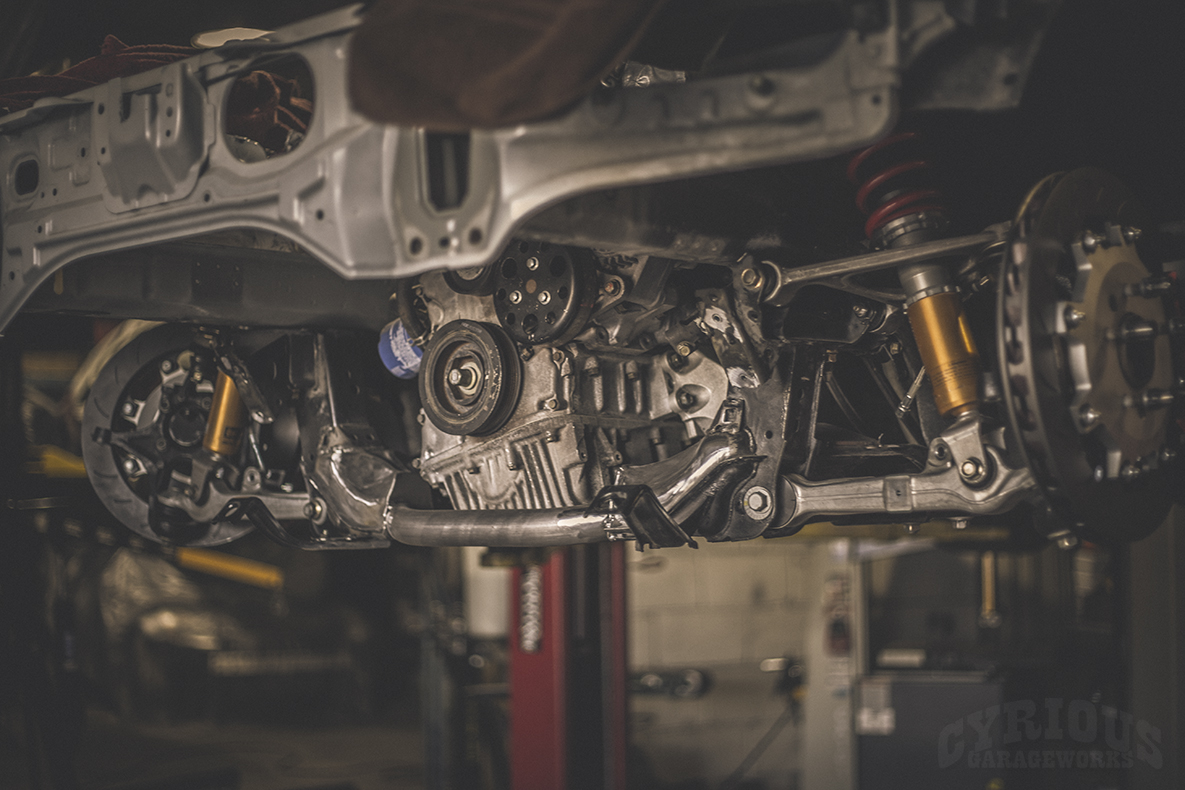 As you can see, the crossmember didn’t stay in one piece for very long. A swap like this reminds you of just how tall the F20C really is. Even with all of these modifications, it’s still a pretty tight fit! 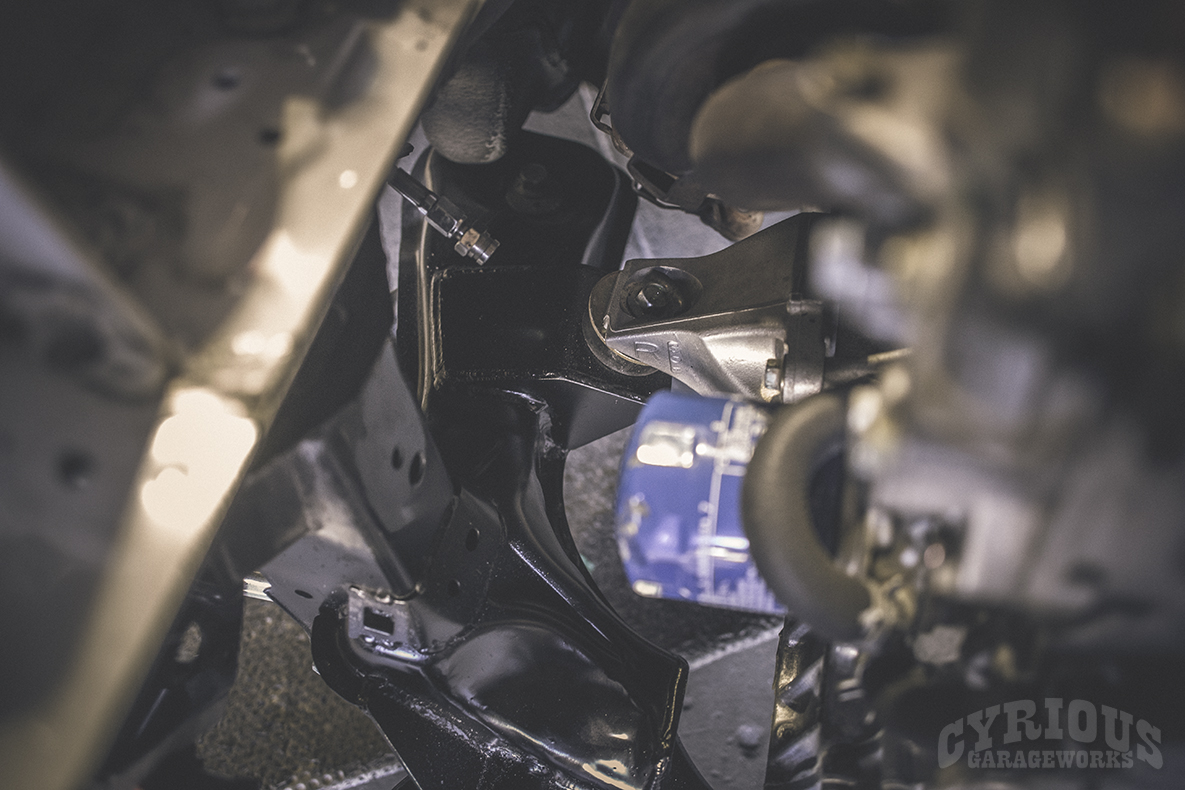 With custom mounts made to mount the engine to the subframe, the F20C was now officially in its new home! 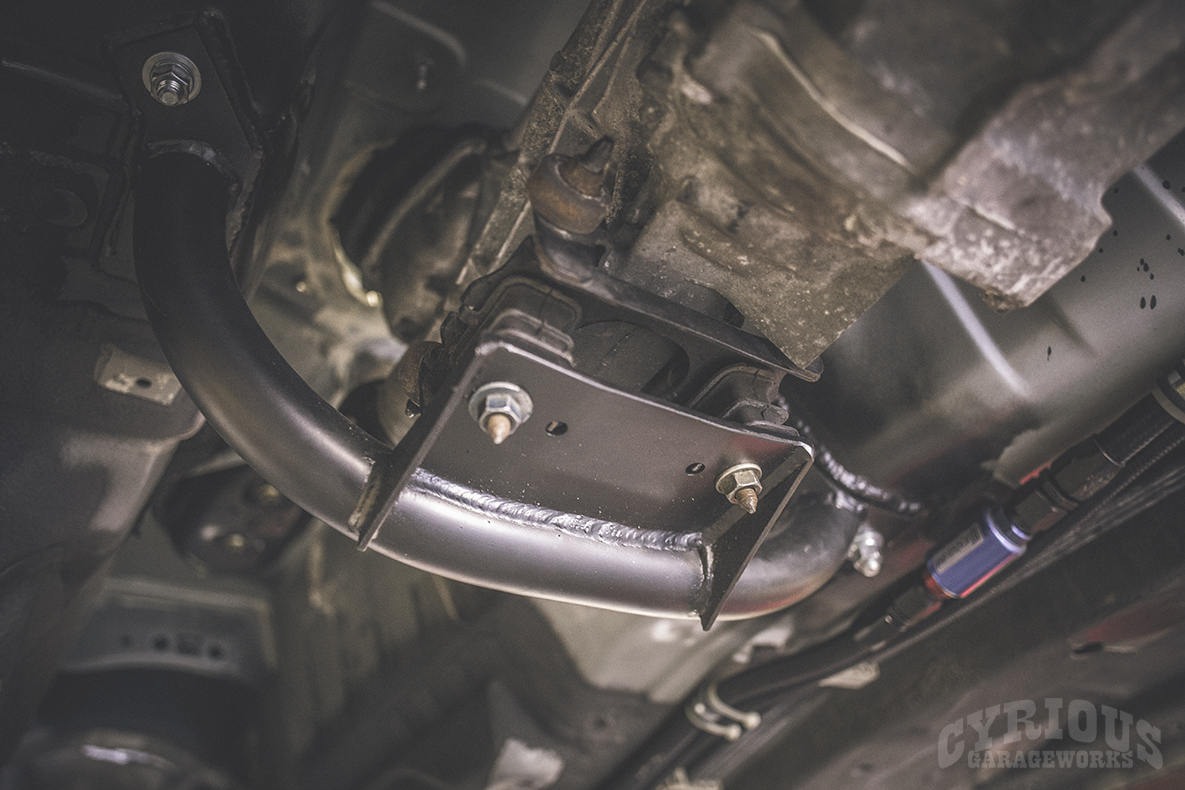 The transmission was of course also bolted into the car with a custom mount of its own! 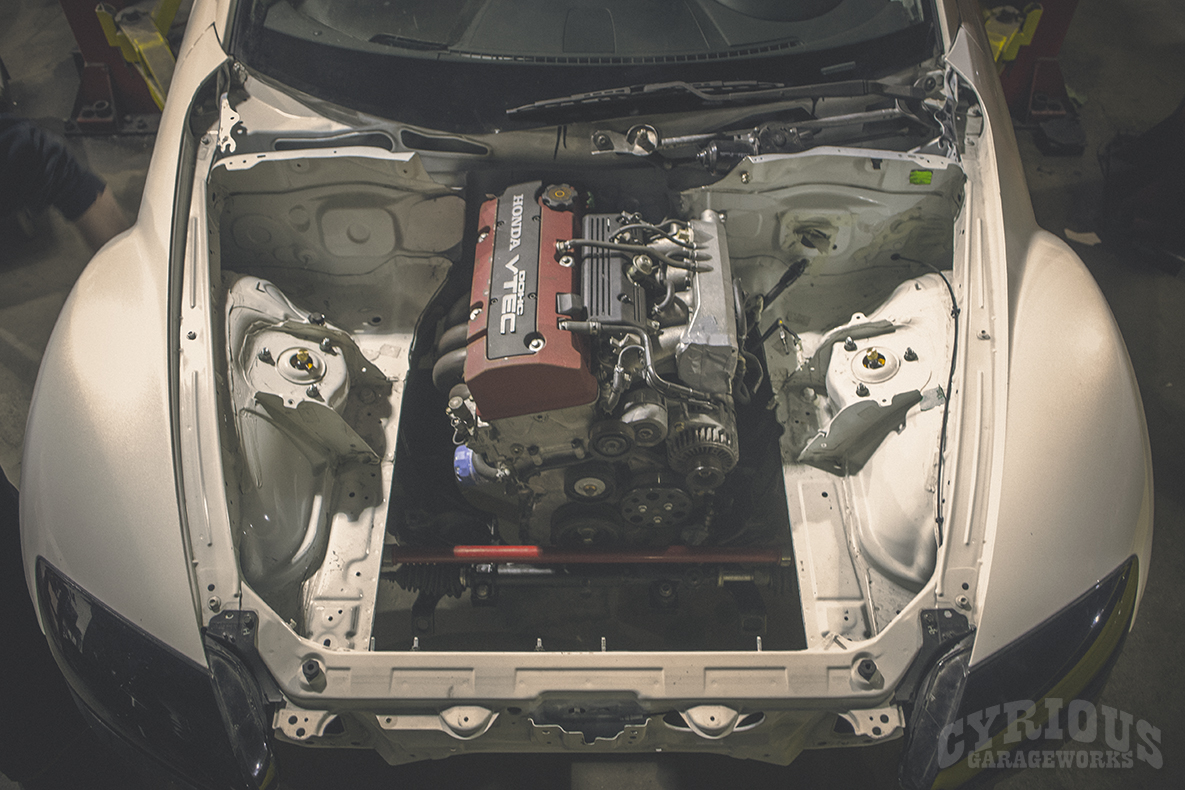 With the engine now permanently mounted, you can see that there is plenty of room for activities up front! 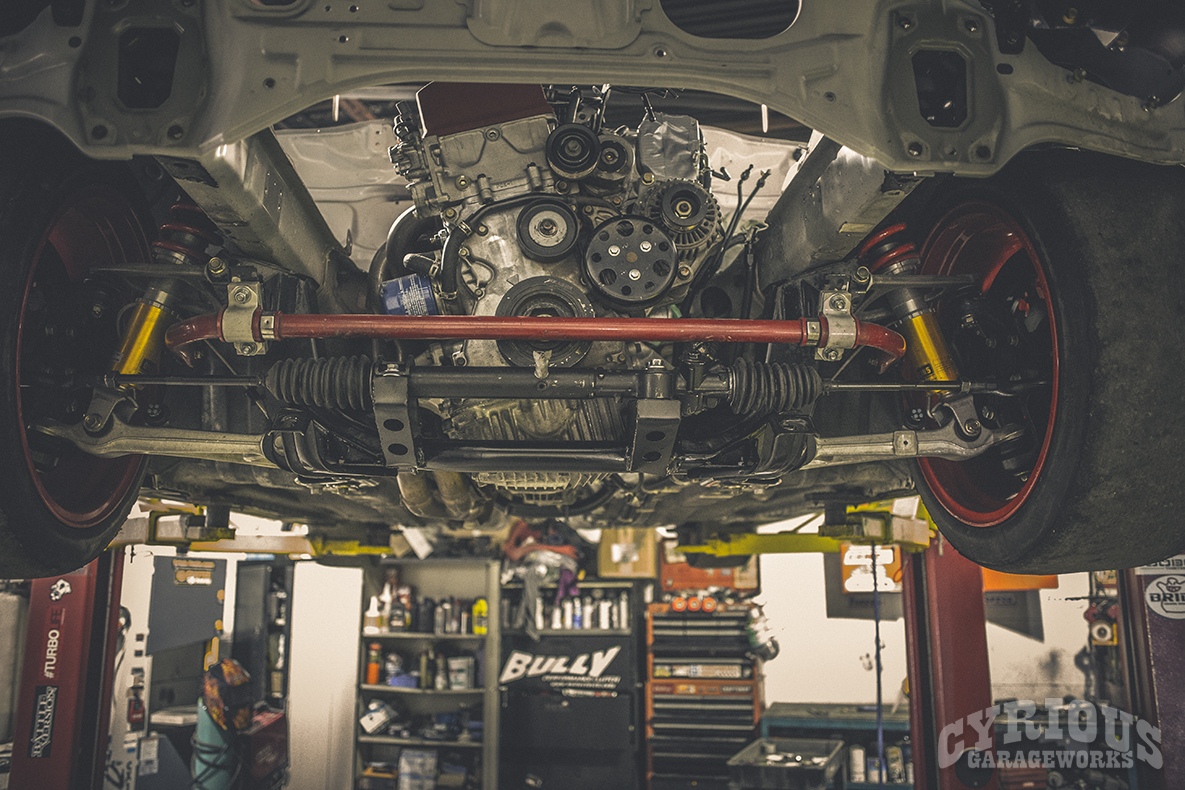 Due to the RX8’s original steering rack being an Electric Power Steering rack, we had to replace it with something with a slimmer form factor. Fortunately, Steve wanted to give manual steering a try, so we wound up coming to the conclusion that using a Mazda Miata manual rack would suit our needs! 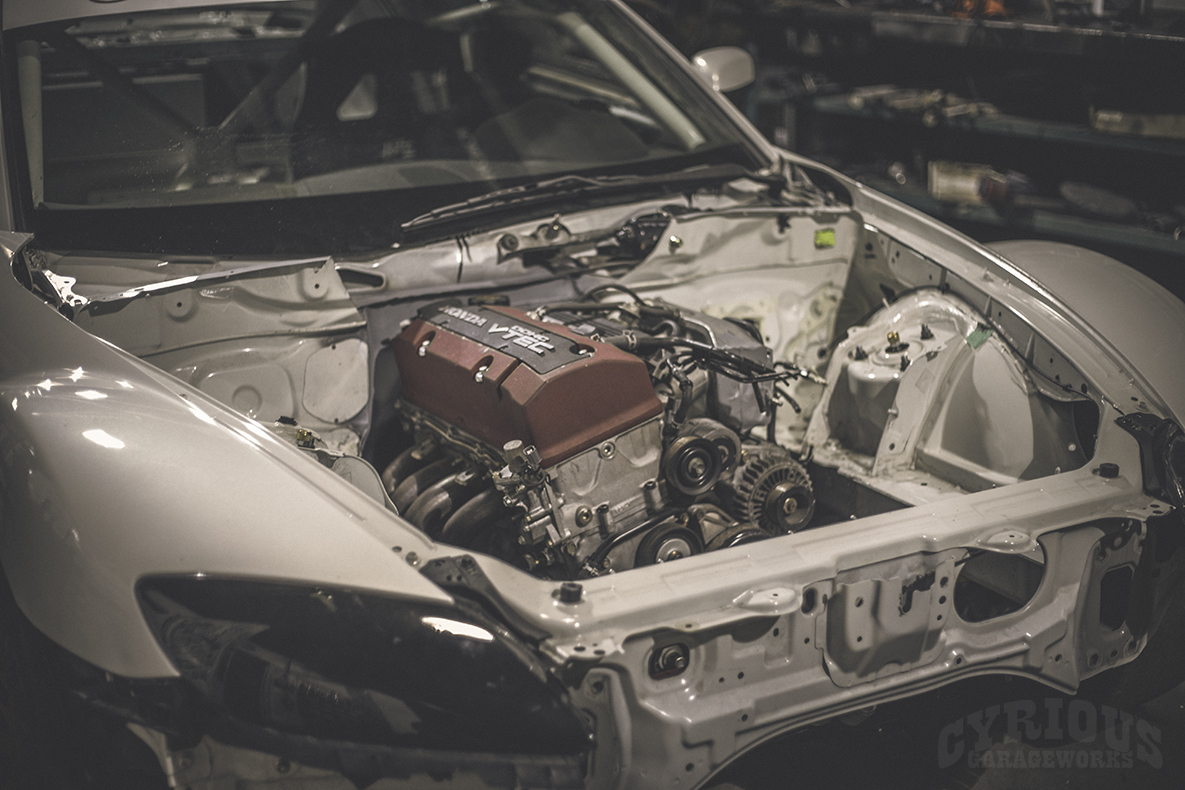 And that brings this post to a close! Steve is a wrench turner himself, and wanted to have a stab at buttoning up the job, so I’m afraid we’re all gonna have to wait to see just what this car can do until we see it at the race track!