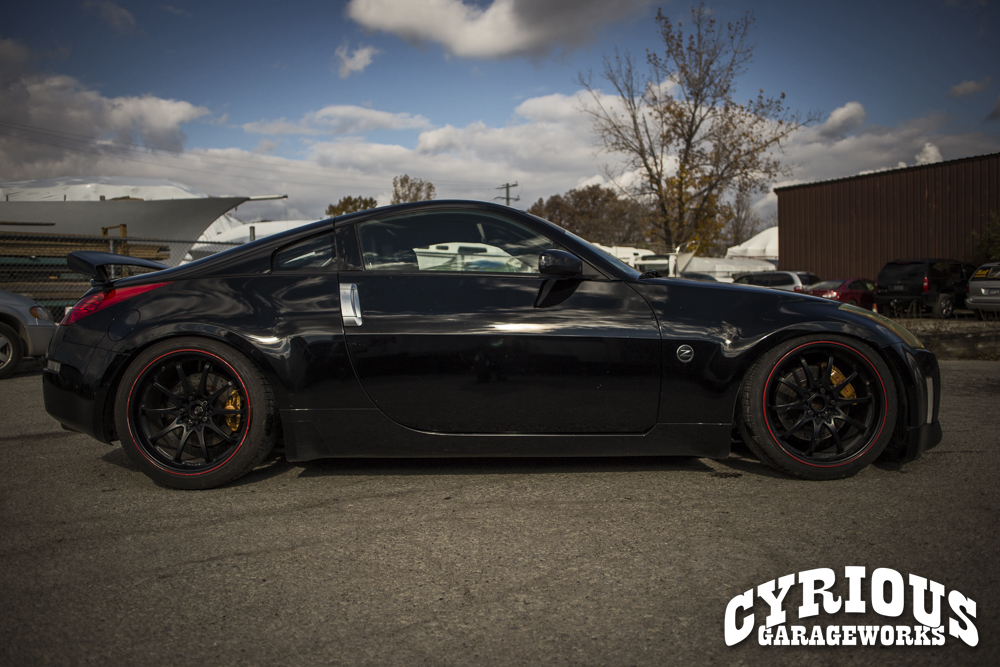 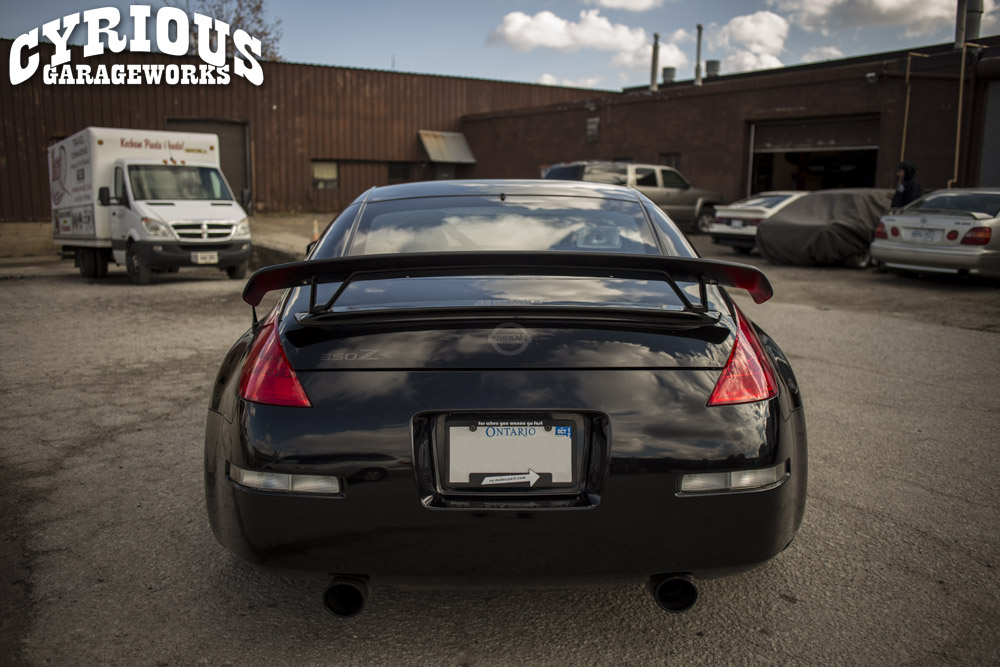 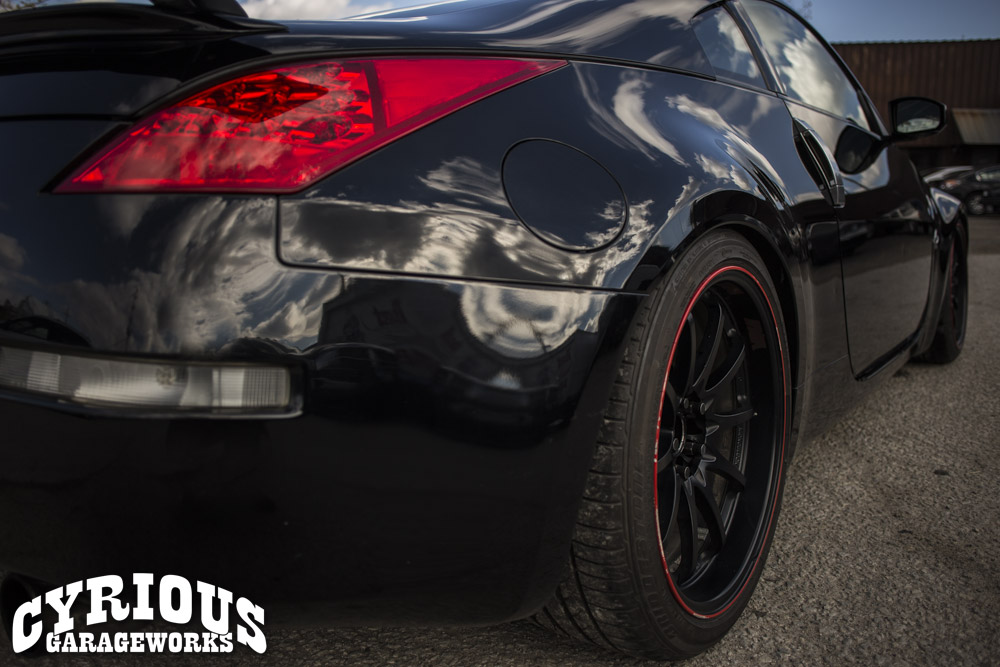 Another part of this car that adds to the menacing look is the nicely fitted set of Volk Racing CE28s. These wheels tend to suit the running theme with this car, having not only a good look, but also serving a practical function as lightweight racing wheels. 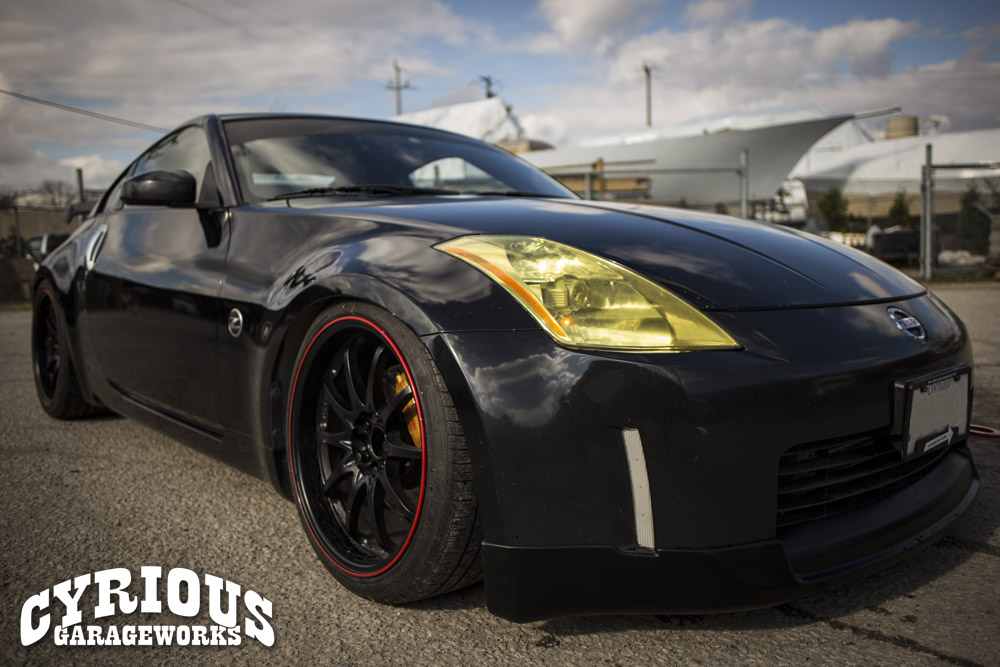 For the most part, to the untrained eye this car is pretty low key on the exterior, other than the little hints about what this car may be all about underneath with the sporty wheels, aftermarket tow hook, and the sizable wing in the back. Upon closer inspection, however, this car begins to show what it’s really all about. 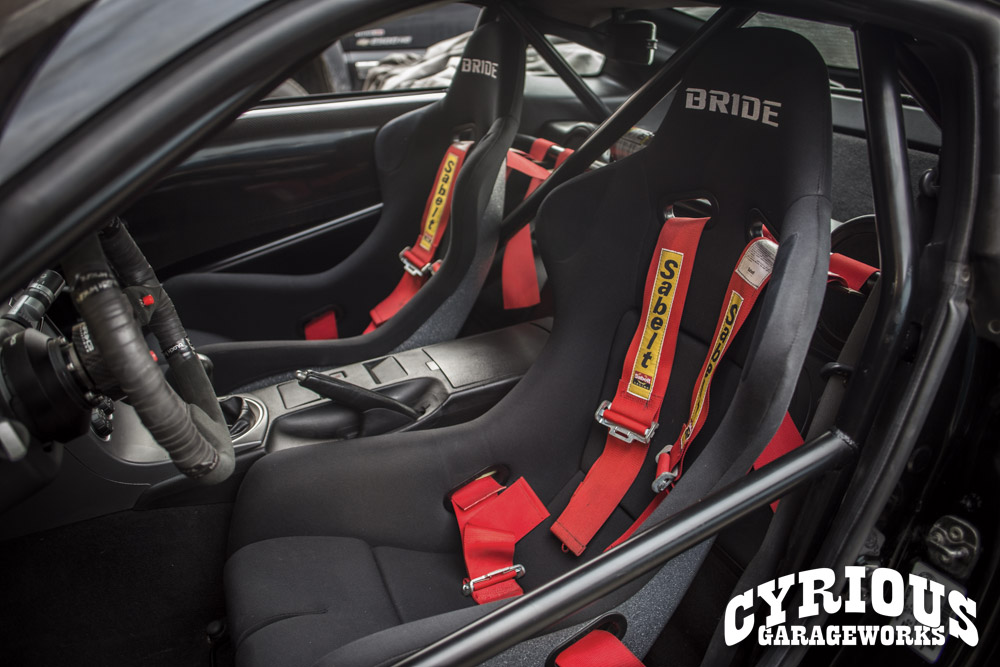 So that’s what was hiding in there! Yup, it’s a welded-in, full roll cage. Not only that but this car still retains its stock interior pieces to allow for the best of both worlds: track car performance and street car comfort! 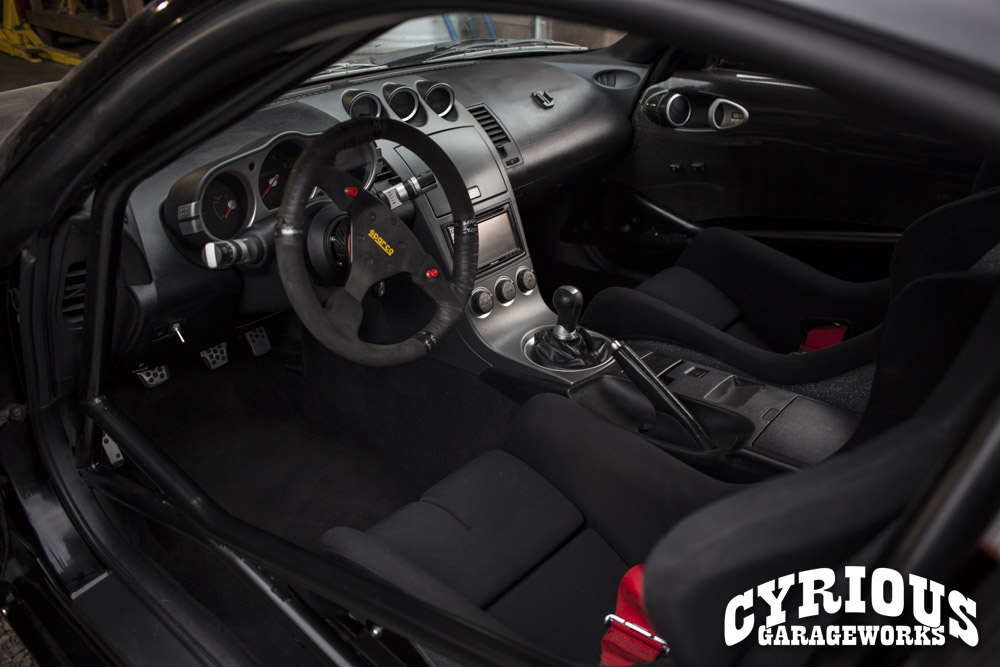 It’s certainly not everyday that you get to see a car with a full roll cage and the full interior. The result is actually surprisingly awesome! Nothing seems out of place, and with a little modification the interior fits around the cage perfectly.

These carbon fibre door panels required the most modification for a couple of reasons. The bottom half had an armrest molded into it, which stuck out 3-4 inches and definitely wouldn’t fit along with the roll cage. On top of that, we were keeping the speakers in this car, so a hole also had to be made to allow for the speakers to be heard. Last but not least, a little notch had to be made at the tail end of the panel to allow clearance for the main hoop bar. 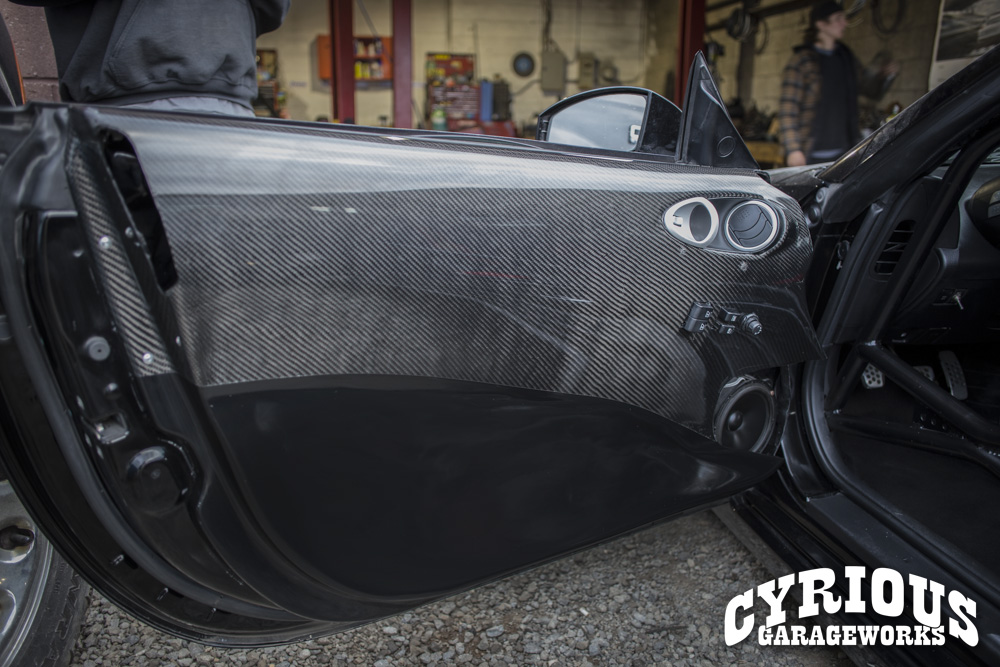 Even with the significant modifications these door panels received to meet our requirements, they still look damn good in the car! 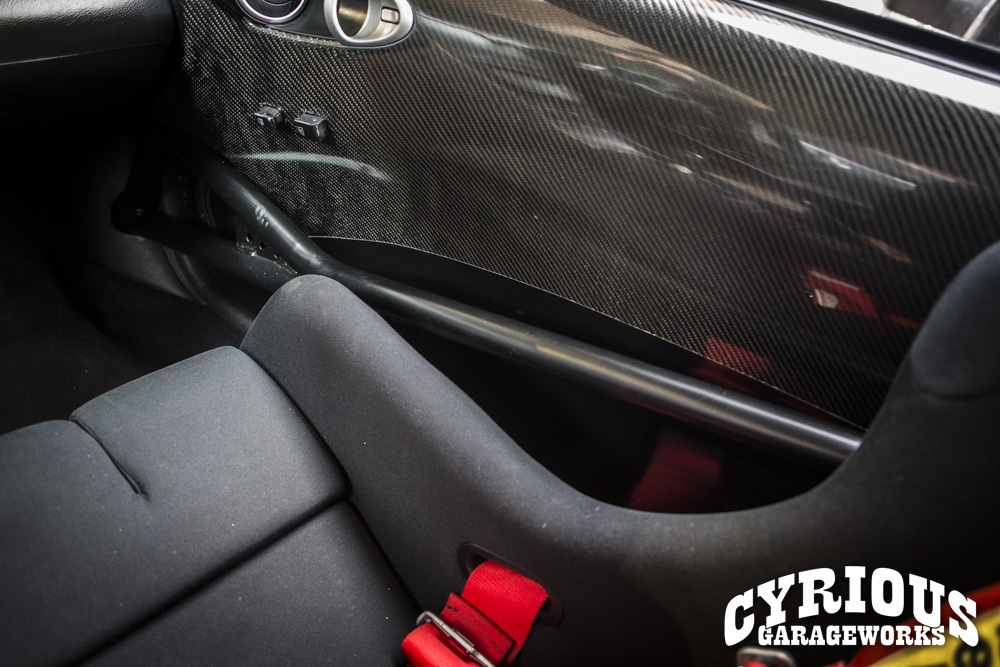 Great success! The doors close, and look good doing it at the same time! As you can see, it’s definitely a tight fit, which brings up the point of why you don’t often see cars with a full welded in cage and a full interior. A lot of times it’s nearly impossible to get all the interior bits in such as the headliner or other parts of interior trim. It wasn’t easy in this car either, but with a little elbow grease and time, everything was able to go back in! 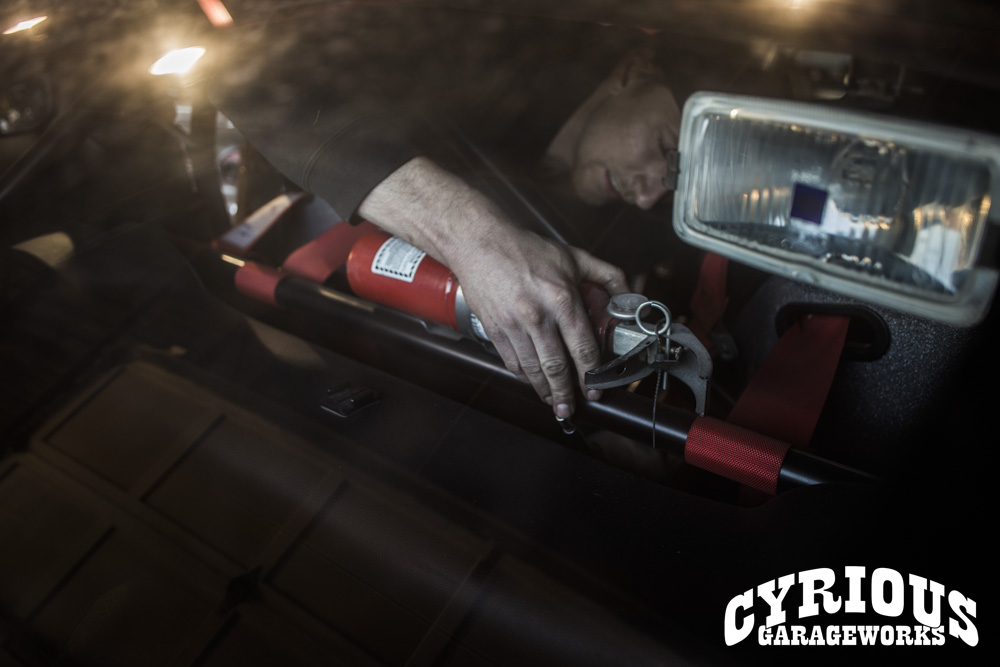 Last but most certainly not least is the fire extinguisher, mounted in an easy to access location on the roll cage. Eagle eyed readers may notice the sizable light pointing out the back window…just a little tail-gating deterrent for good measure, although most people would be fairly hard pressed to get close to this car because… 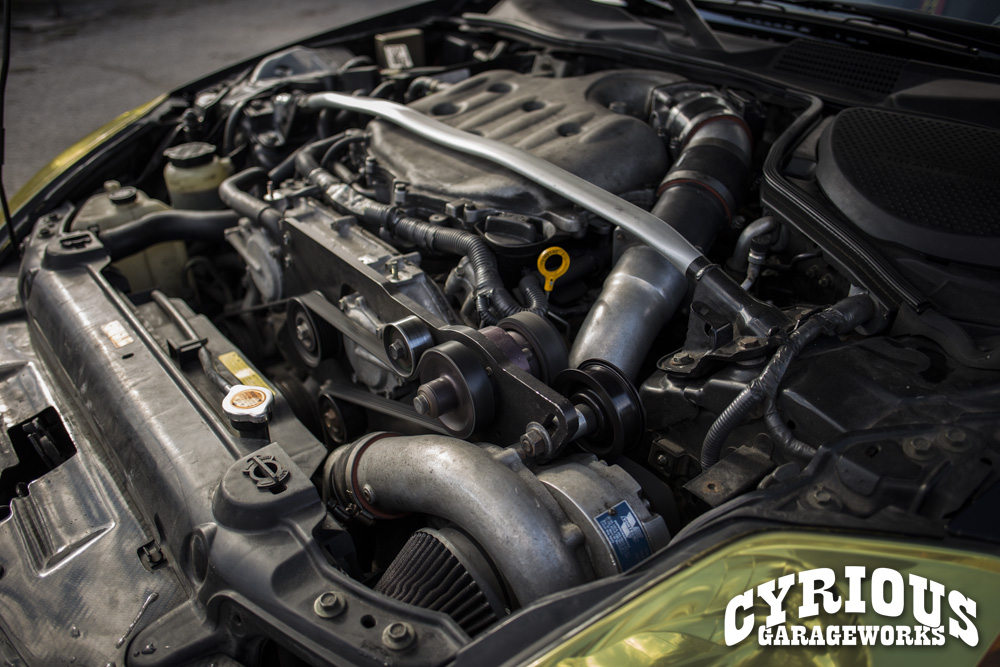 …there’s a Vortech Supercharger stuffed on to this VQ, increasing the power output of this stock engine from about 287hp up to 420hp. Coupled with a set of SG Motorsports equal length long tube headers, not only does this car really move, but it makes a sound like a supercar that can be heard for miles. 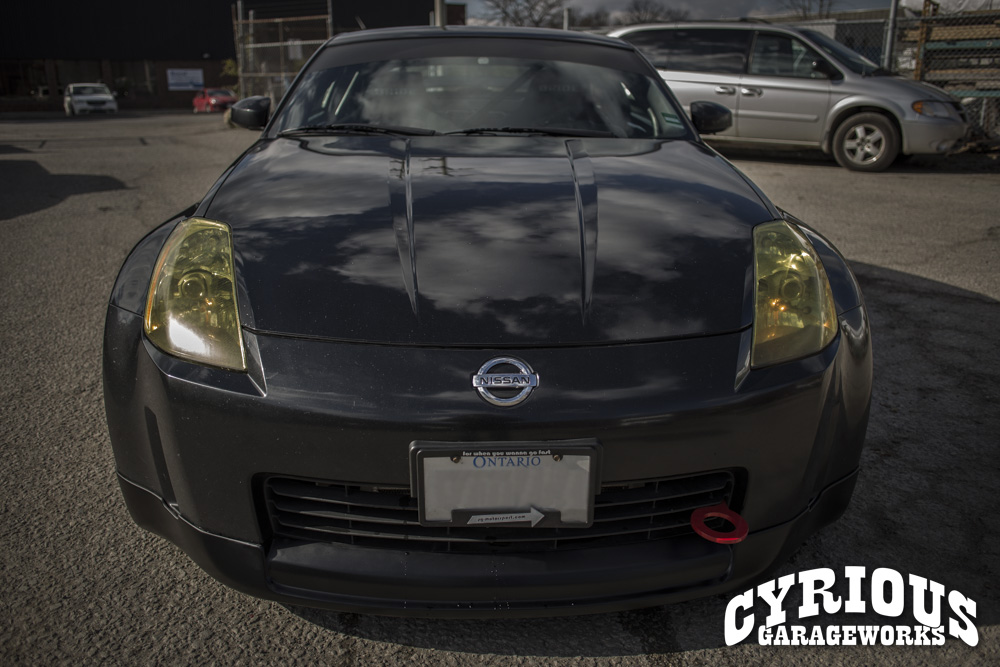 This 350z is pretty nearly as aggressive as one may want to go with a street car, while still retaining street car comfort. Even though it may not have the typical “hellaflush” stance that’s all the rage these days, this car is made to go fast, and if you’re ever lucky enough to see it on the street, it may be doing just that!