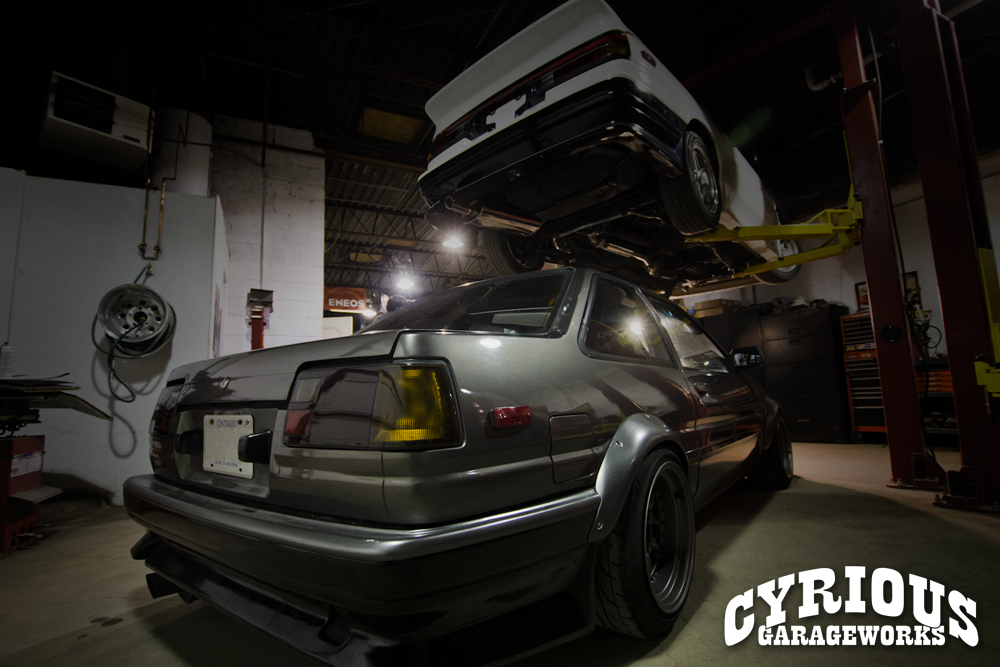 Motor swaps are another of the more popular improvements that a lot of people make to their cars, and it can be done for a number of reasons. Sometimes a motor swap can simply be done to replace a blown motor with a not-blown motor. In other cases, motor swaps are done to swap in either a newer, or more powerful (or both) engine for increased performance and reliability.

Motor swaps can be completed with varying degrees of difficulty. Sometimes the desired motor was actually an option for the prospective car from the factory, so depending on parts availability the swap could actually not involve very much imagination/fabrication as far as fitting the engine, and the main part of the job is just getting everything to work (which isn’t always as easy as it sounds). That however, is not the case with the swap we did to this totally rad AE86 Coupe. This customer opted to swap out the old 4AGE with something quite a bit more modern, but at the same time keeping a Toyota heart in his machine.

And here is the motor in question: a BEAMS (Breakthrough Engine with Advanced Mechanism System) 3SGE Blacktop, taken from a 2001 Toyota Altezza RS200. Being a newer motor, it’s pretty clear that this was never a factory option for the ’86 Corolla Trueno. As an added degree of difficulty, however, this particular motor was never a factory option for any car sold here in North America. This meant that any parts that needed to be sourced for the motor itself would require a little bit of researching to find out what kind of alternatives from North American models would be appropriate, if at all possible.

As with just about any motor swap that wasn’t a factory option, a big part of the installation is getting everything to fit and clear properly. If the motor is mounted too high, the hood would potentially need to be modified (ugly) and there’s a good chance that the transmission won’t fit. On the other hand, if the motor is mounted too low, then the oil pan will be lower than the subframe, making it the lowest part of the car with risk of getting smashed when going over speedbumps or small obstructions in the road. A lot of care has to be taken in order to ensure that the motor is mounted in just the right spot to make everything clear properly, so we decided to modify the subframe to make our own motor mounts for this car.

Perfect fitment was achieved using a combination of solid billet aluminum subframe spacers, as well as our custom fabricated motor mounts and reinforcement on the factory subframe. This made it so that we didn’t have to modify the hood (which wouldn’t have been pretty with it being a fibreglass hood), and so that some minor massaging was needed on the trans tunnel to fit the transmission.

Even with the motor mounted exactly where we wanted it, some modification was still needed to get the oil pan to not fall below the subframe. We modified the oil pan to be a couple centimetres shorter, and that gave us all the clearance we needed!

Once the motor was fitted to the car, we designed and fabricated this custom transmission mount to help hold everything in!

With the motor being swapped, the old exhaust no longer worked so a new one was needed. Besides, what’s a Cyrious build without a custom stainless steel exhaust? Gotta make sure they hear ya comin’!

This car will be seeing plenty of track time in its near future, so we decided to go with a time-attack inspired turn down exhaust. It’s definitely a unique finishing touch for this car, and hints a little bit at the beastly nature of this ultimate gripping machine!