Here at Cyrious Garageworks we’ve had the opportunity to work on and restore classic cars from all sorts of different eras and origins. At this point though, in competition with AE86s for being one of our more popular items is the Datsun 240z. We’ve had a few of these through the shop for varying degrees of restoration and modification. This one may wind up being the crowning jewel for a long time to come, however. We were approached to restore this Datsun 240z, originally from somewhere on the eastern side of the US. It seems like there’s always a catch somewhere though, and this one is no different! The twist with this car, is that we’ve been tasked with creating something akin to a Singer Porsche. Basically it’s a car that’s made to look mostly original to the untrained eye, but upon closer inspection has been customized to create the perfect mixture of old and new. This particular chassis was picked for the job not because of the quality of the chassis itself, but because it’s one of the first Datsun 240z’s to make the trip over from Japan and be sold in North America. Not only that but the numbers matching engine and drivetrain is still mated to this car, and we’re actually keeping it in there for once!  With that in mind, let’s see what we’ve got to work with! 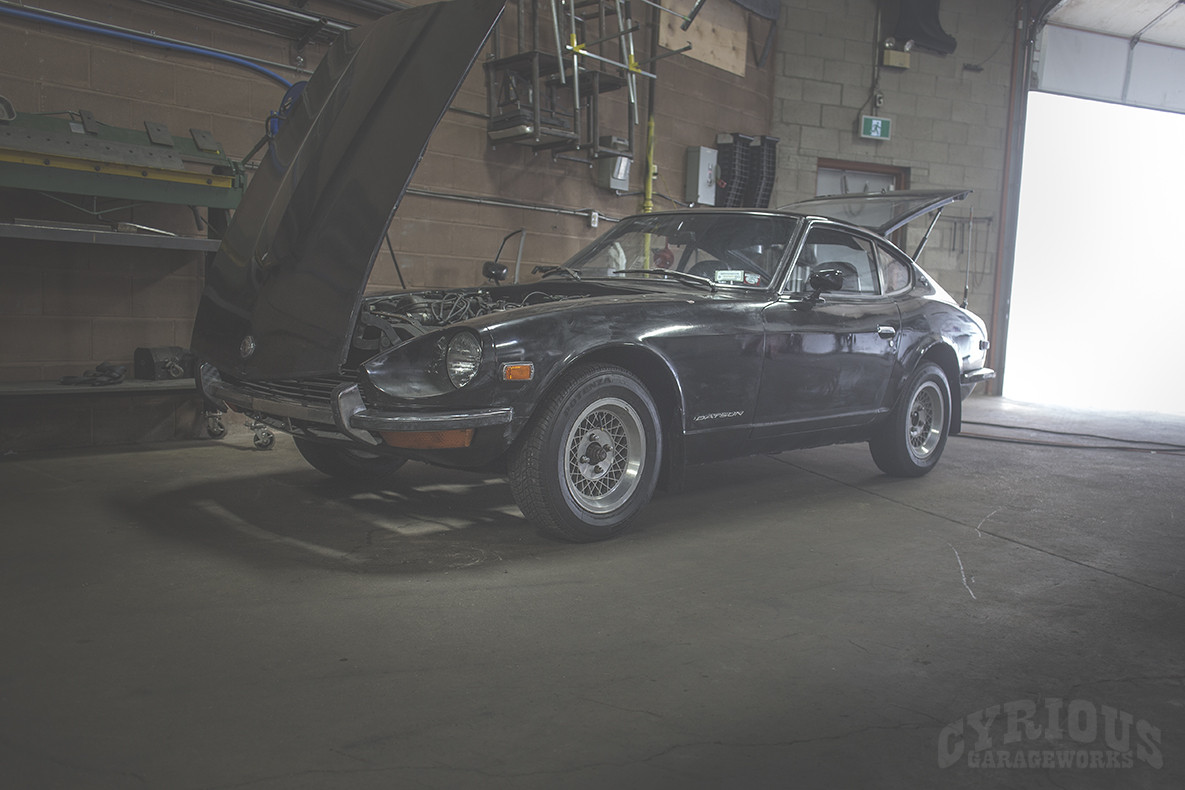 What a beaut! In all seriousness though, from this angle and distance, this car actually looks to be in not too bad of a shape. If you’ve seen some of our previous builds though, you’ll know that looks can sometimes be deceiving. 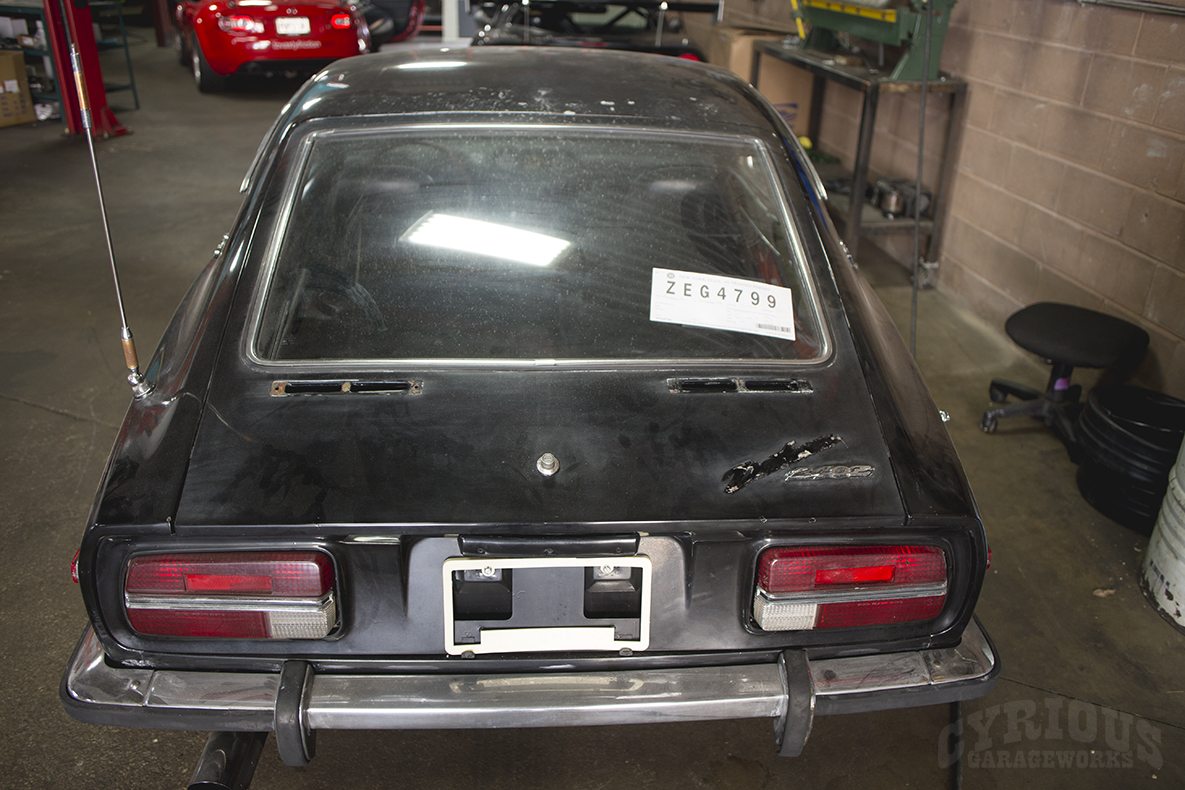 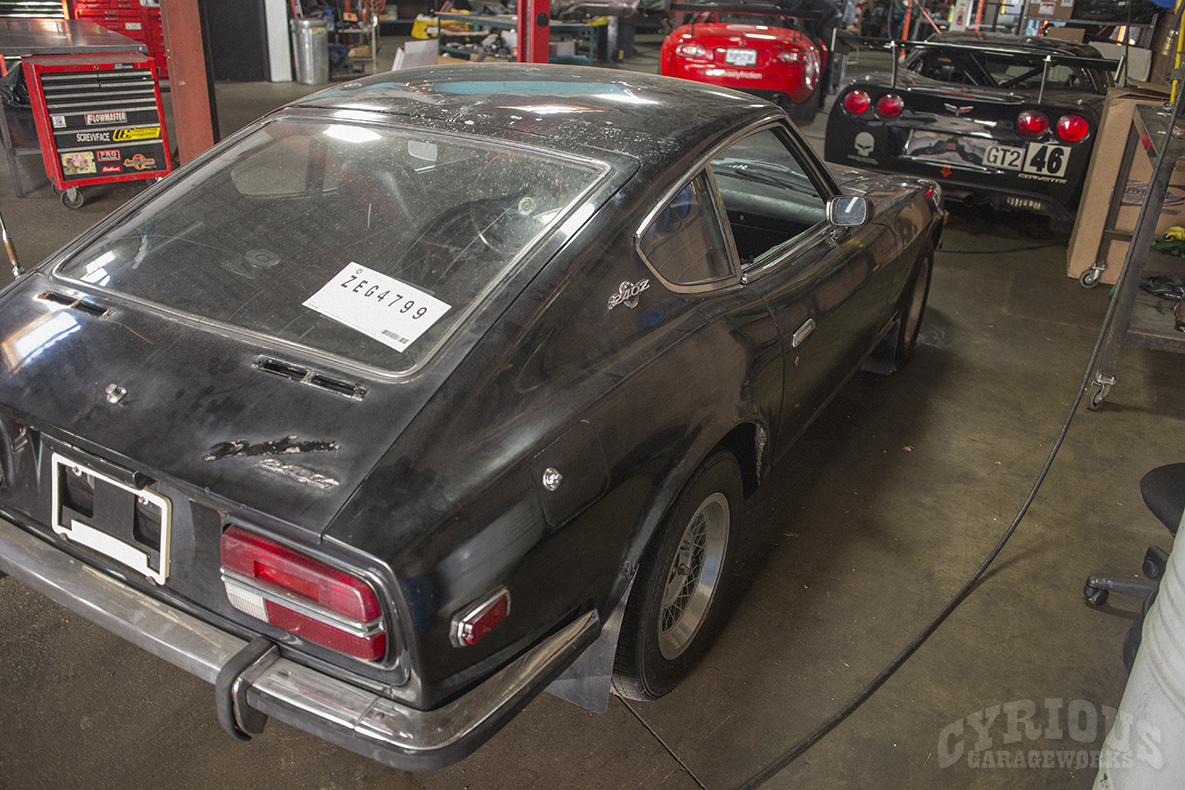 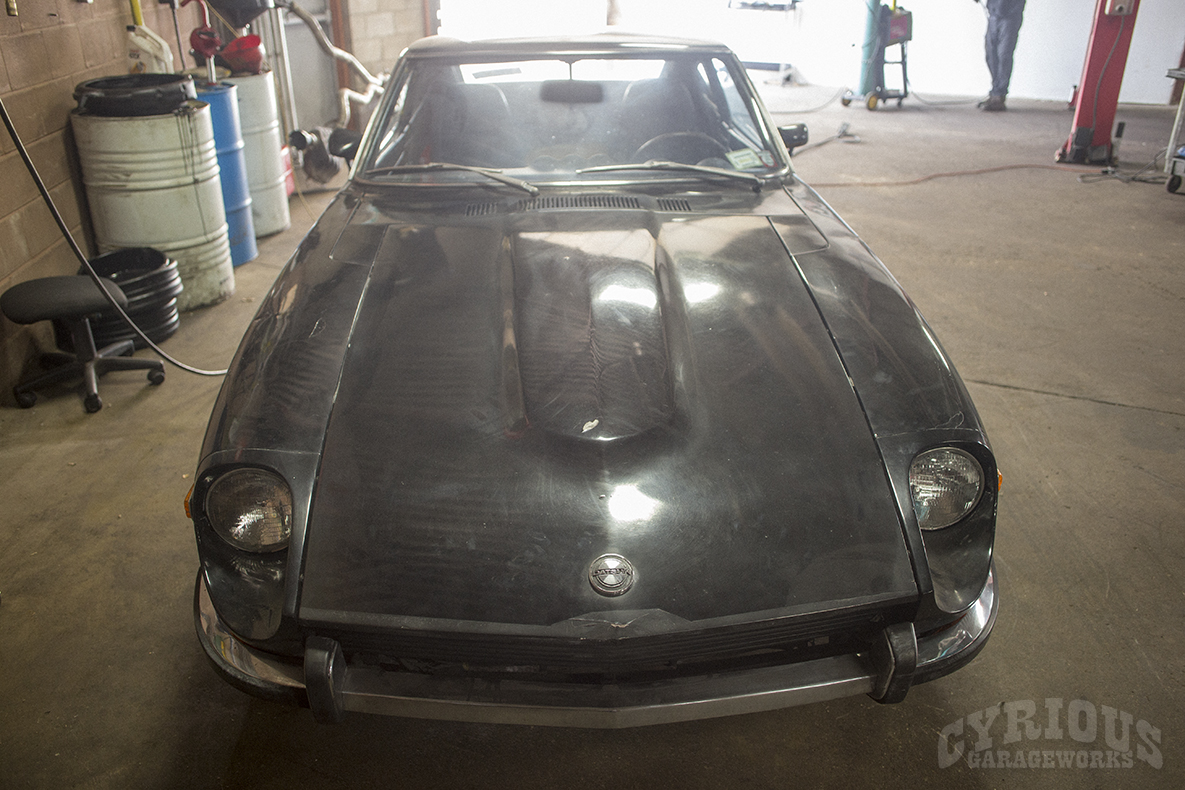 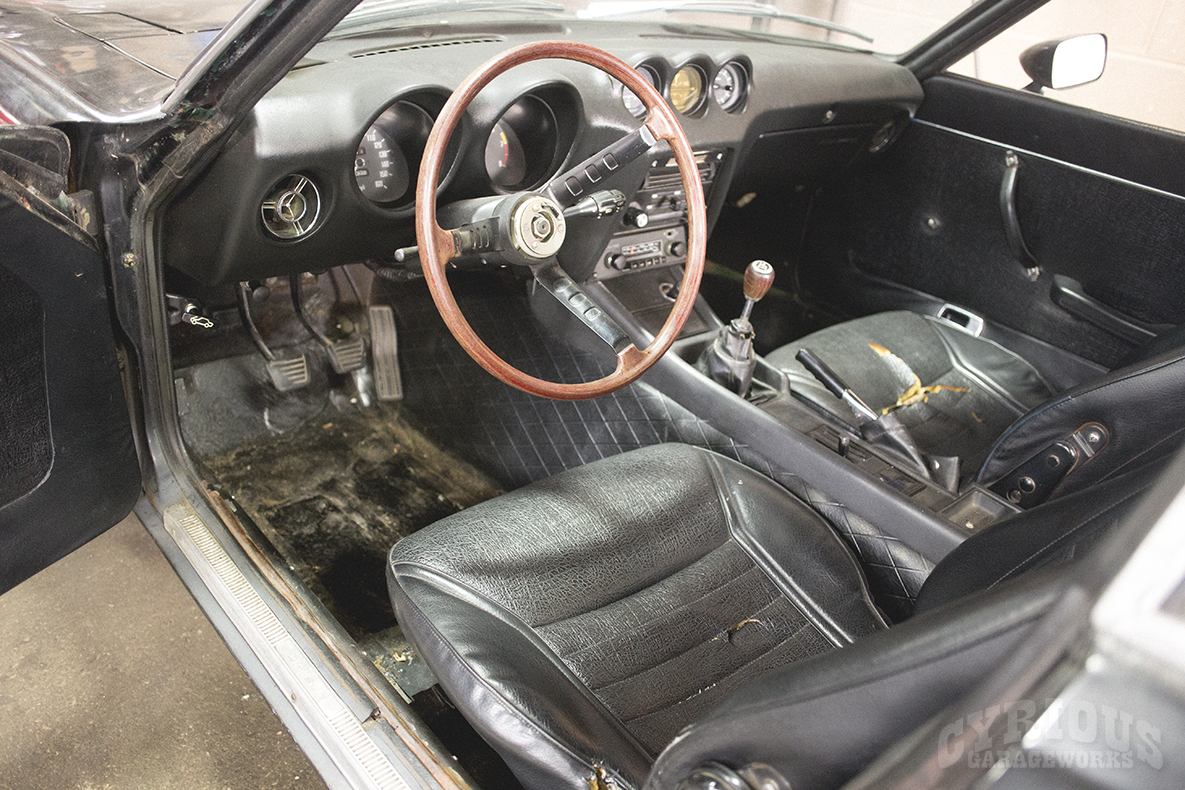 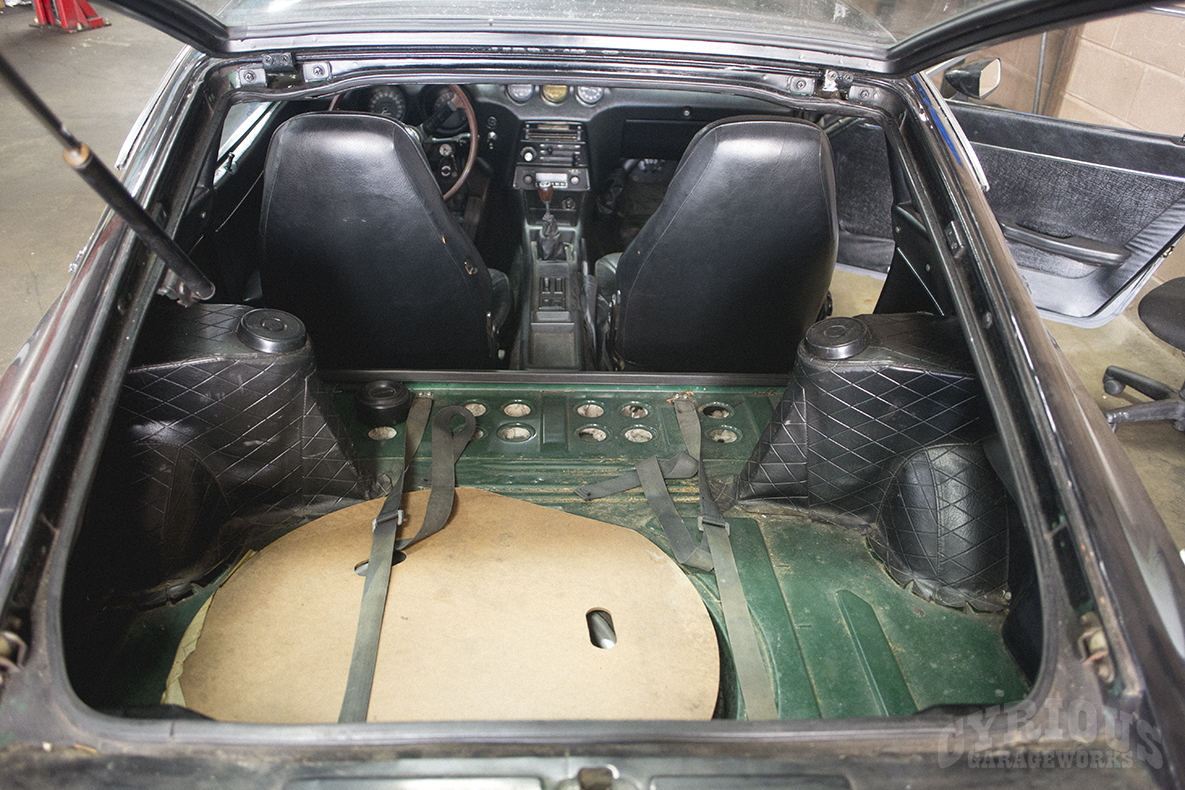 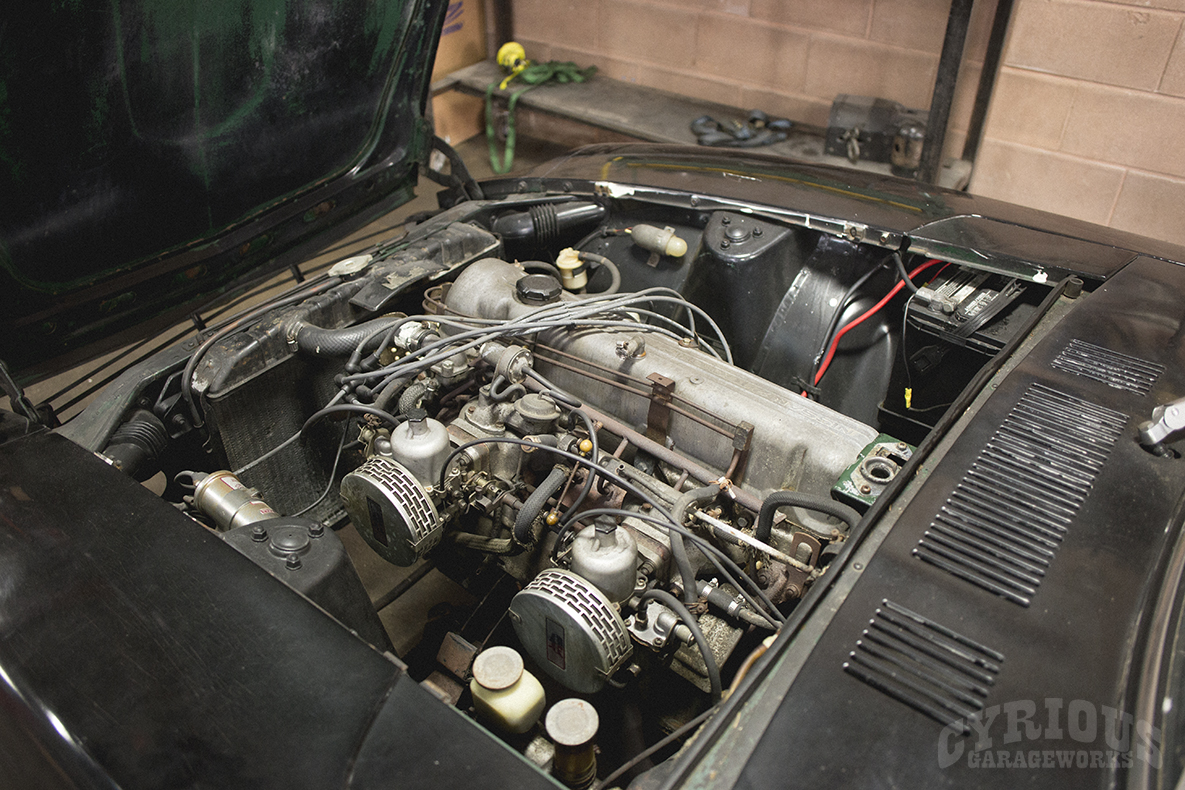 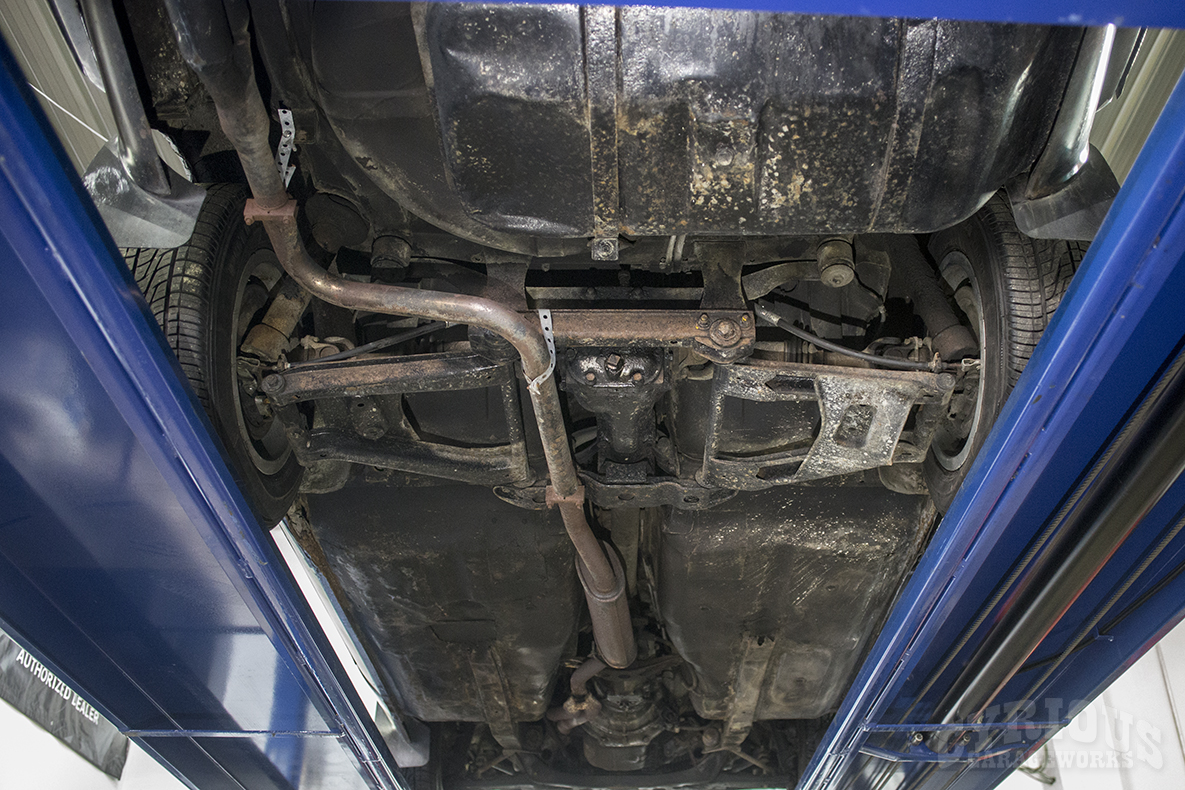 Well, it’s pretty clear that this vehicle was green at one point in its life, which means that somebody has done something to this car somewhere along the line. Once again it looks somewhat half decent on the surface, but a car like this is almost guaranteed to have some hidden surprises when the wrenches start turning on it. Patchy floors underneath being one of them, of course. The homemade exhaust hangers are definitely an indication that this thing was worked on by a home mechanic. There are plenty of talented home mechanics out there mind you, but you’ll often see that home built cars tend to suffer over the years. Time to dig in! 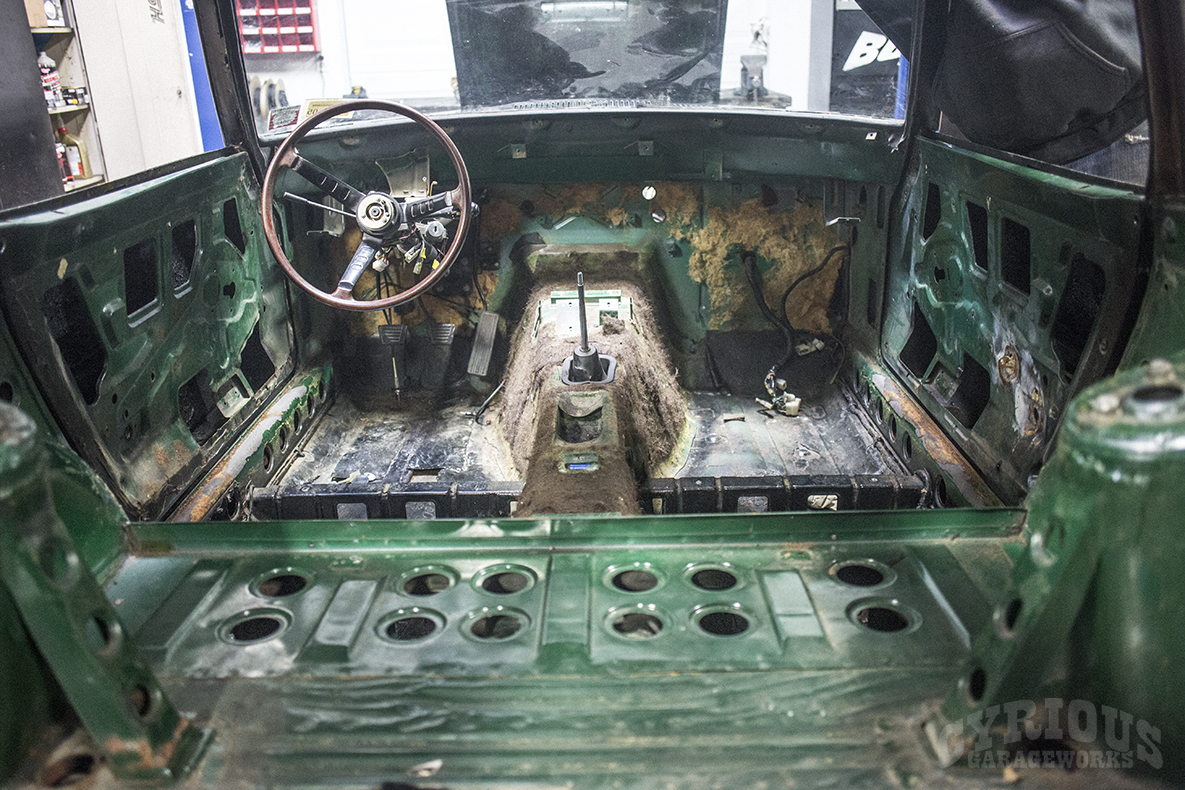 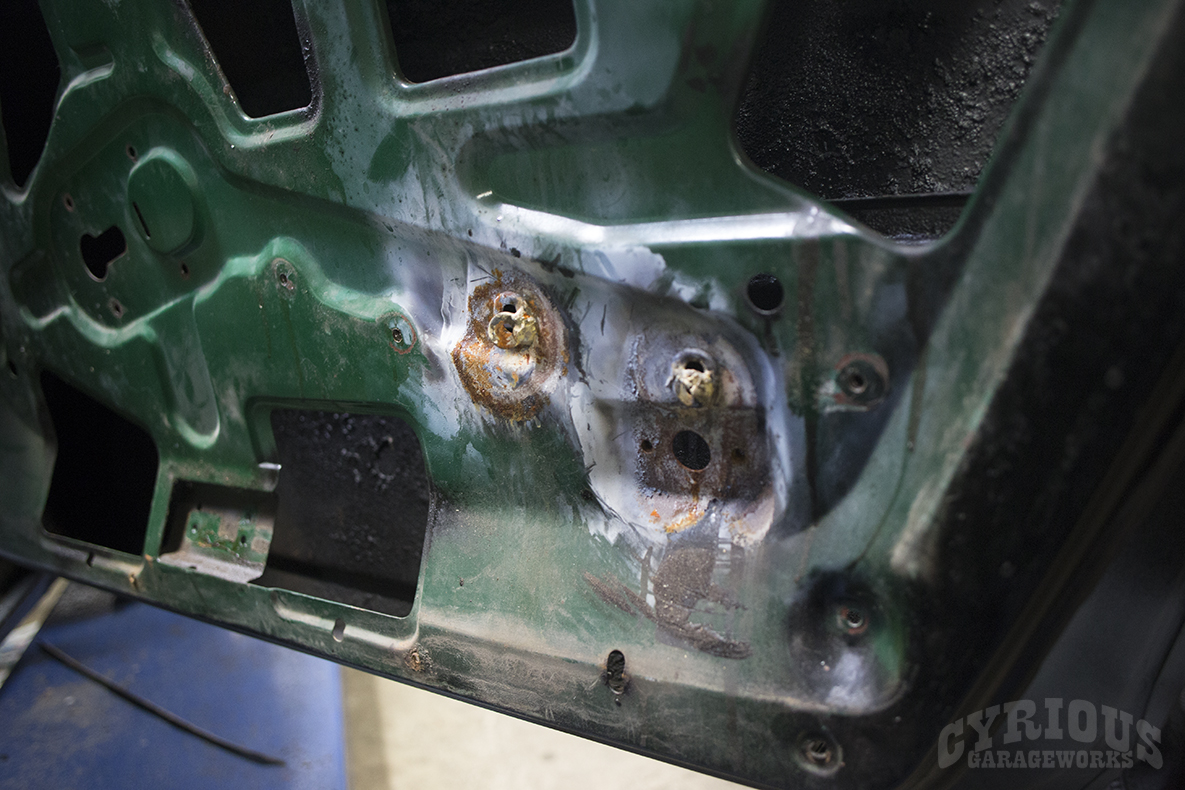 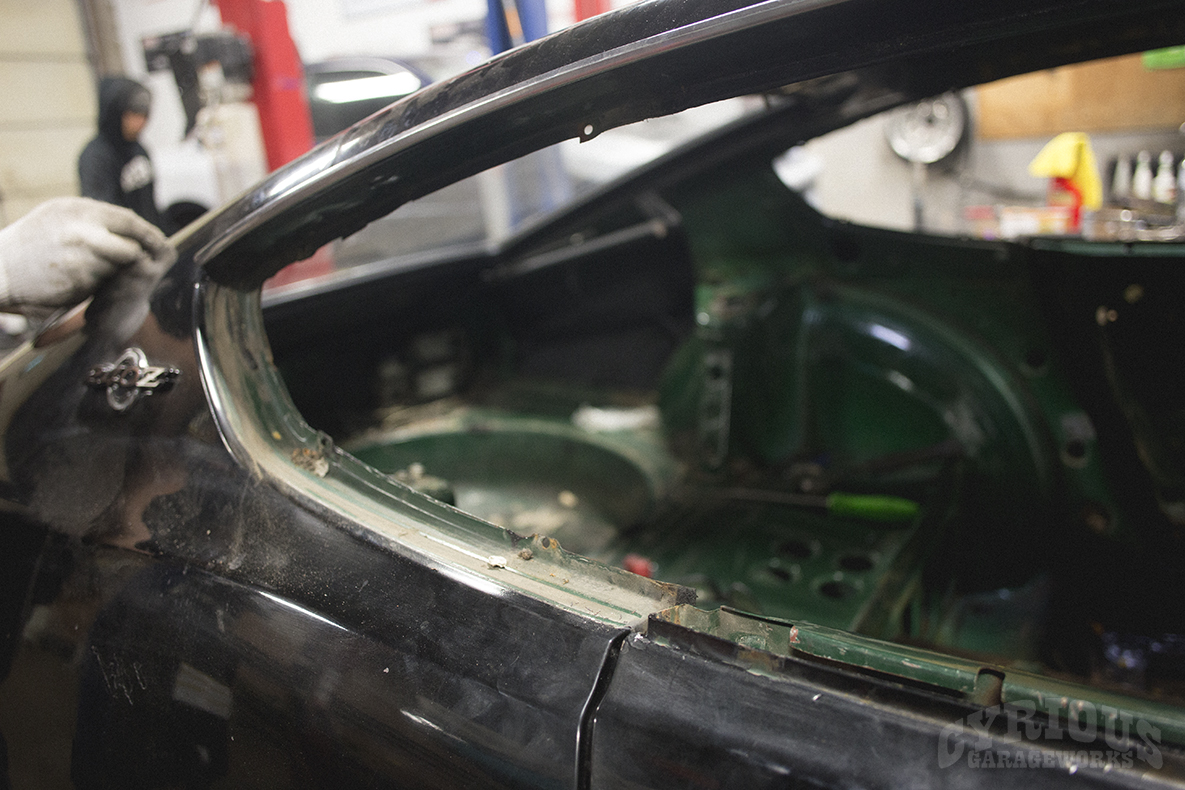 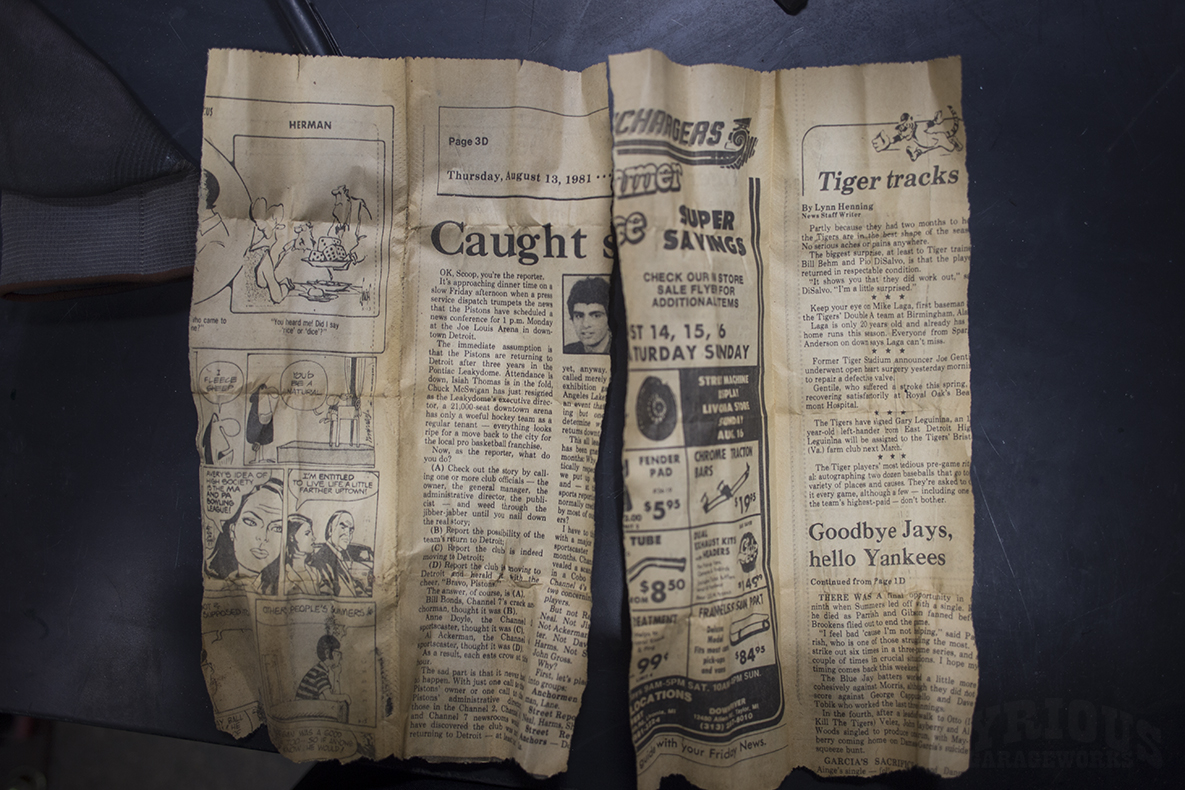 Classic cars are almost like a time capsule by themselves, showing us how cars were built in the past. They also can sometimes have little treasures (or garbage) from the past that can be kind of fun to look at. This car had an old piece of newspaper stuffed inside one of the fenders. Seeing that the paper is from 1981, this is a fairly likely indication of when the car was actually “restored” for the first time. The diggin’ continues! 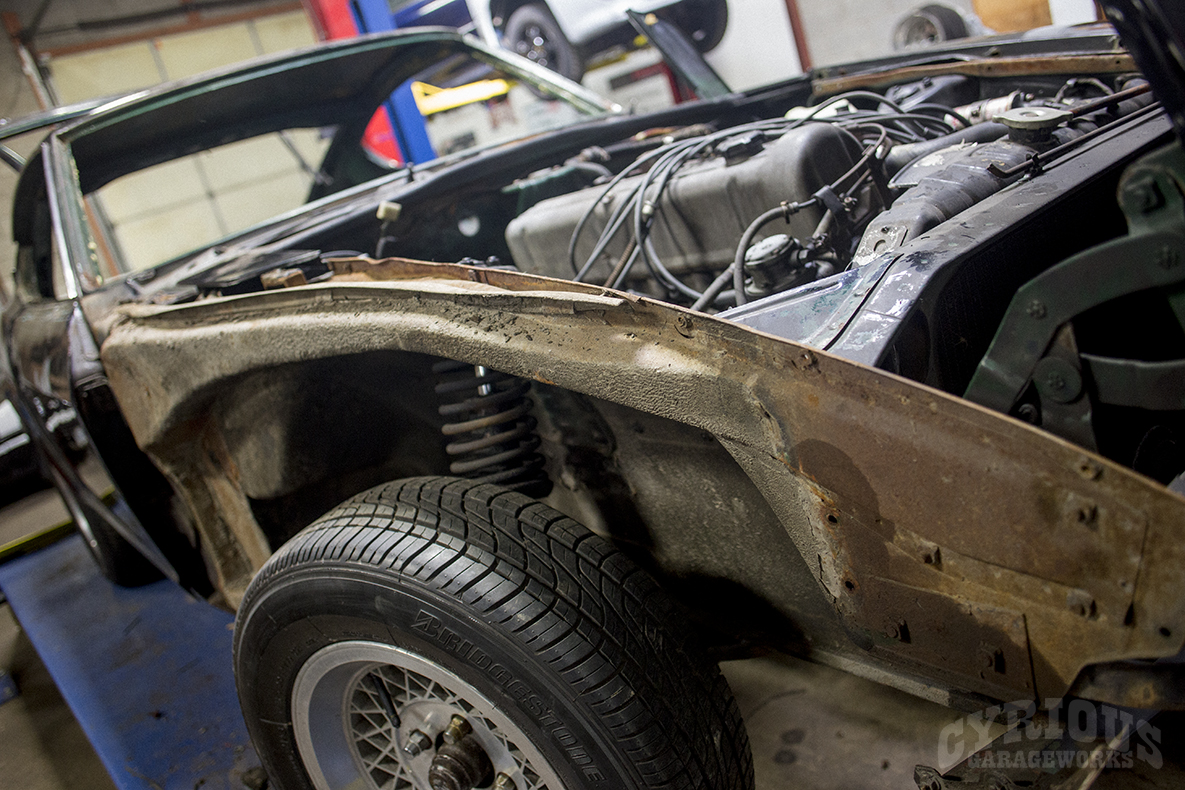 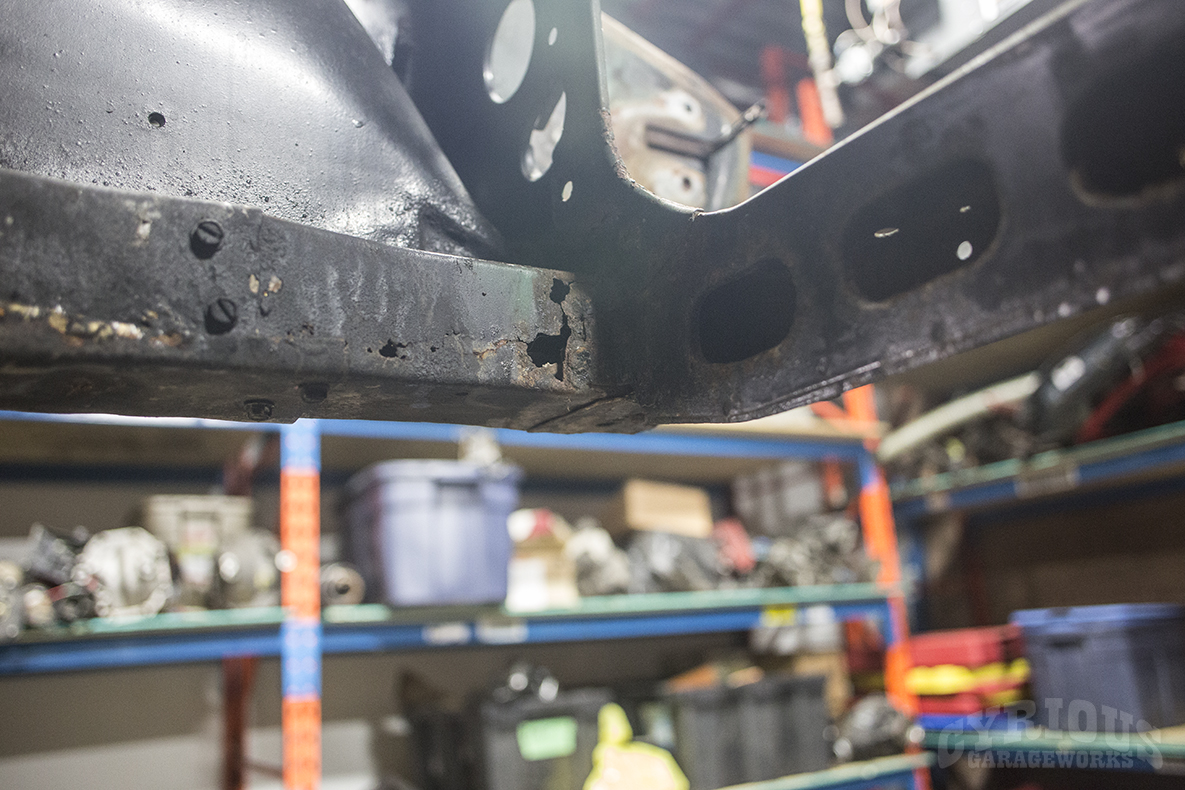 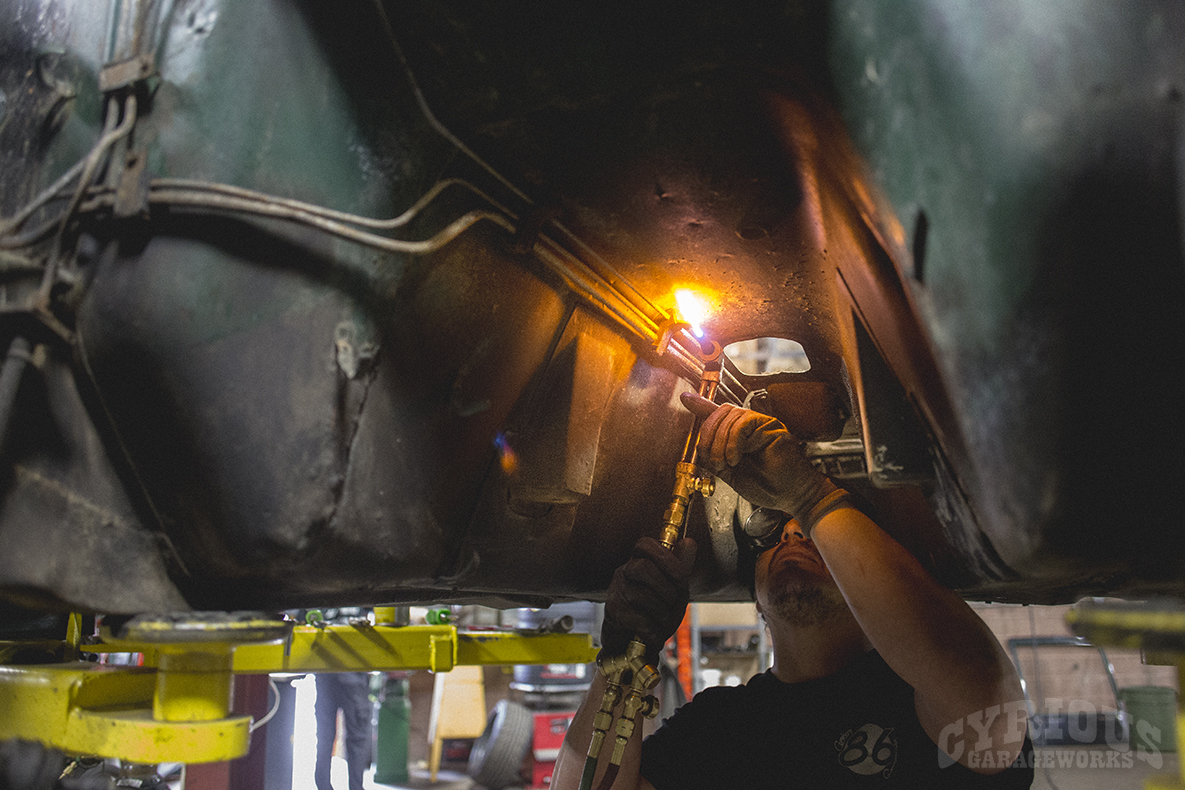 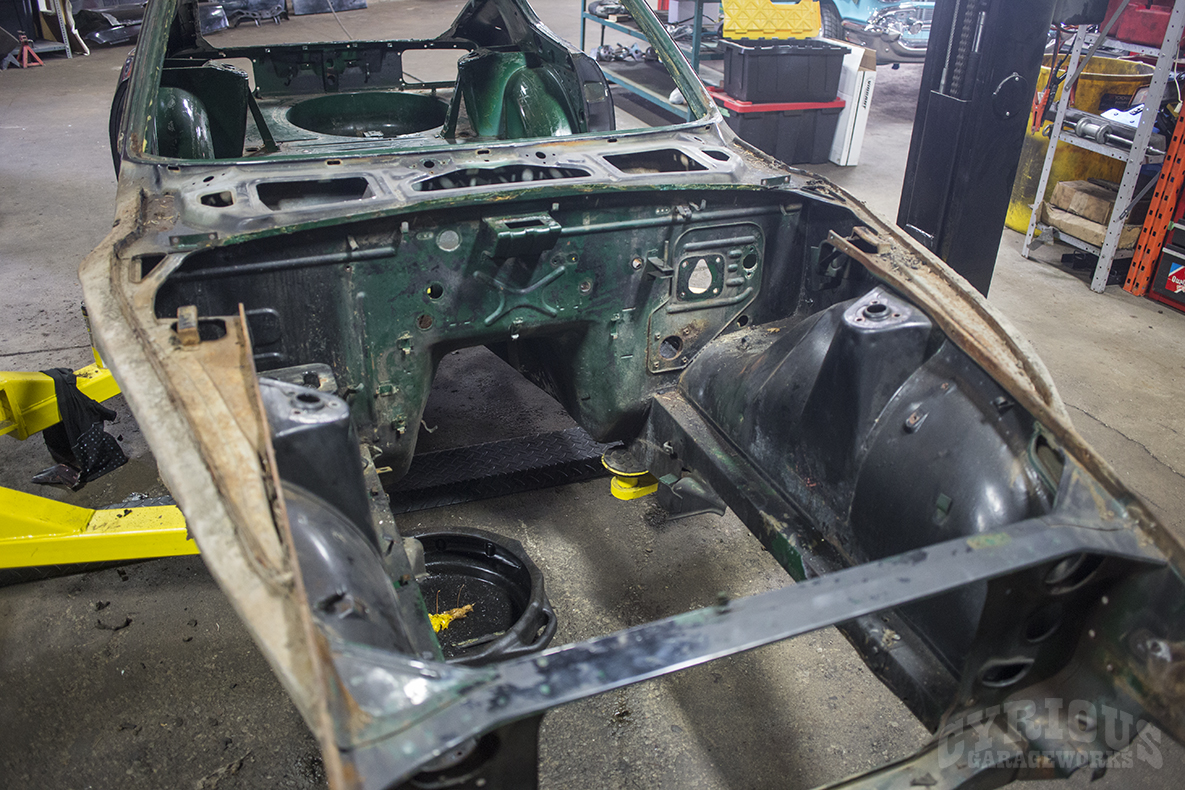 With the car completely disassembled, the hunt for rust begins! Fortunately, we won’t have to look very hard…. 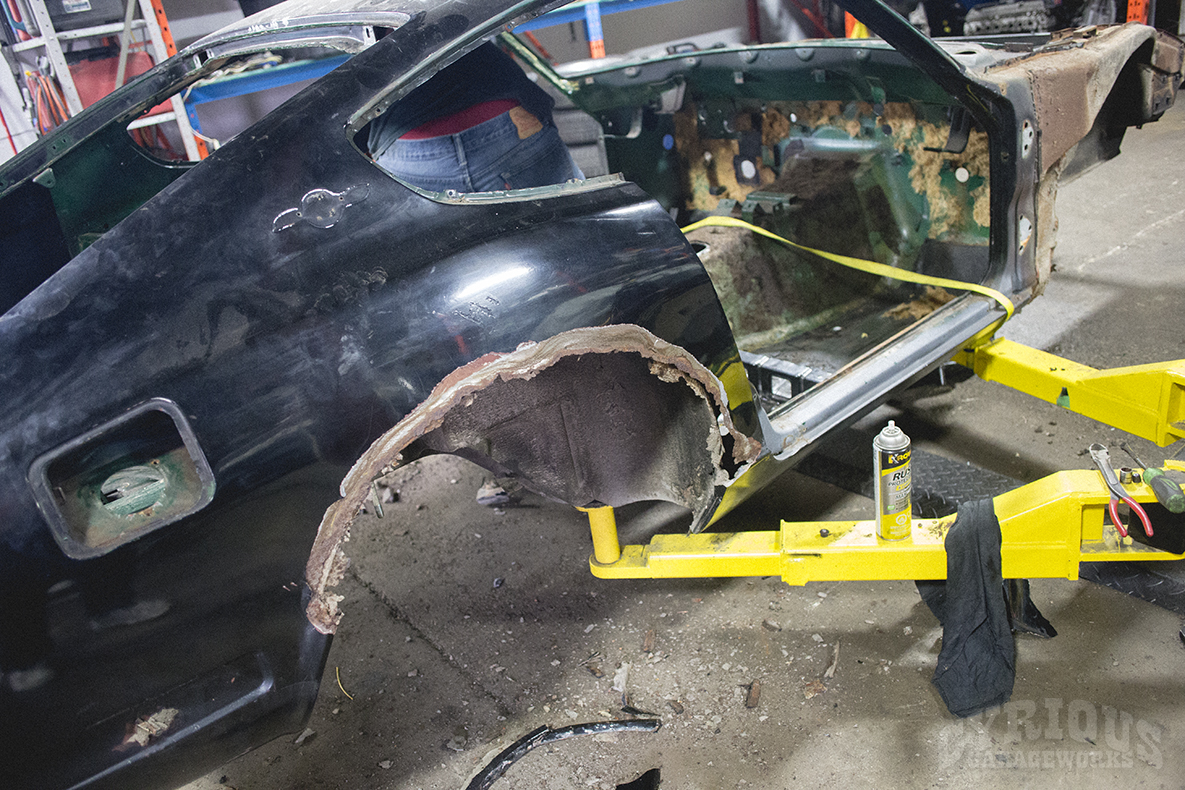 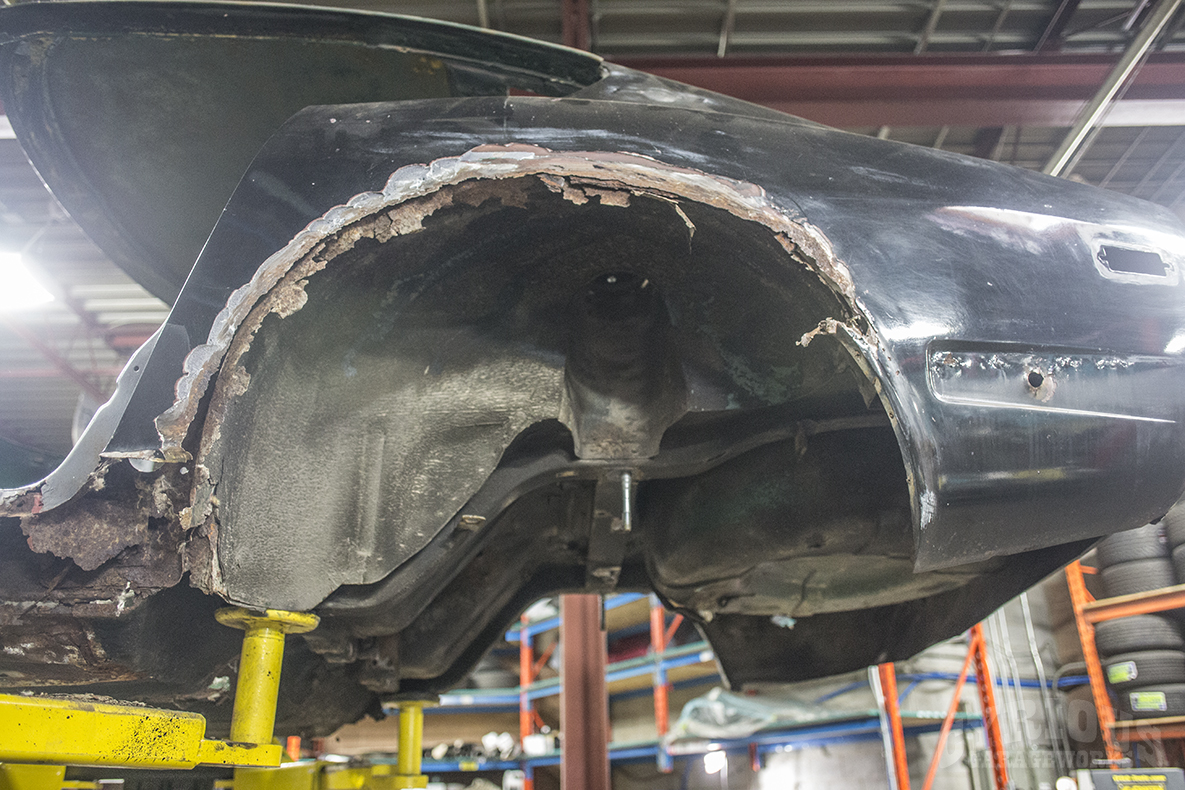 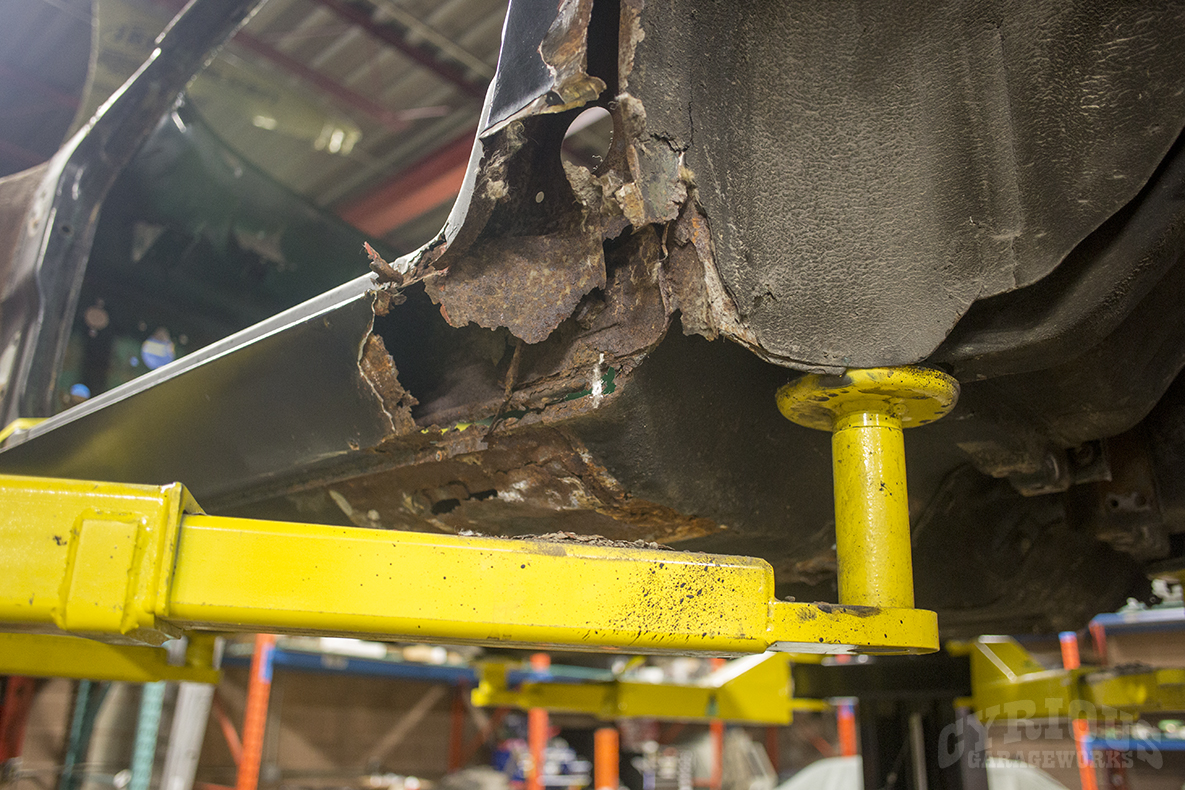 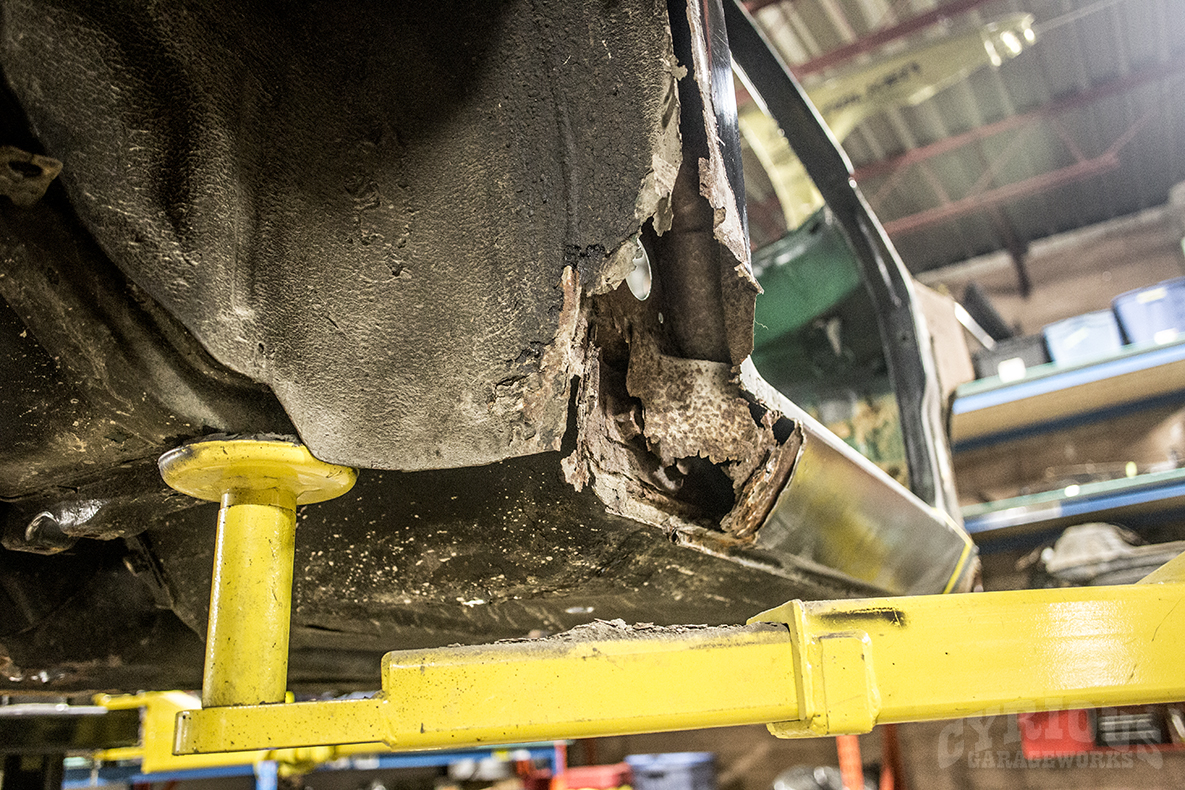 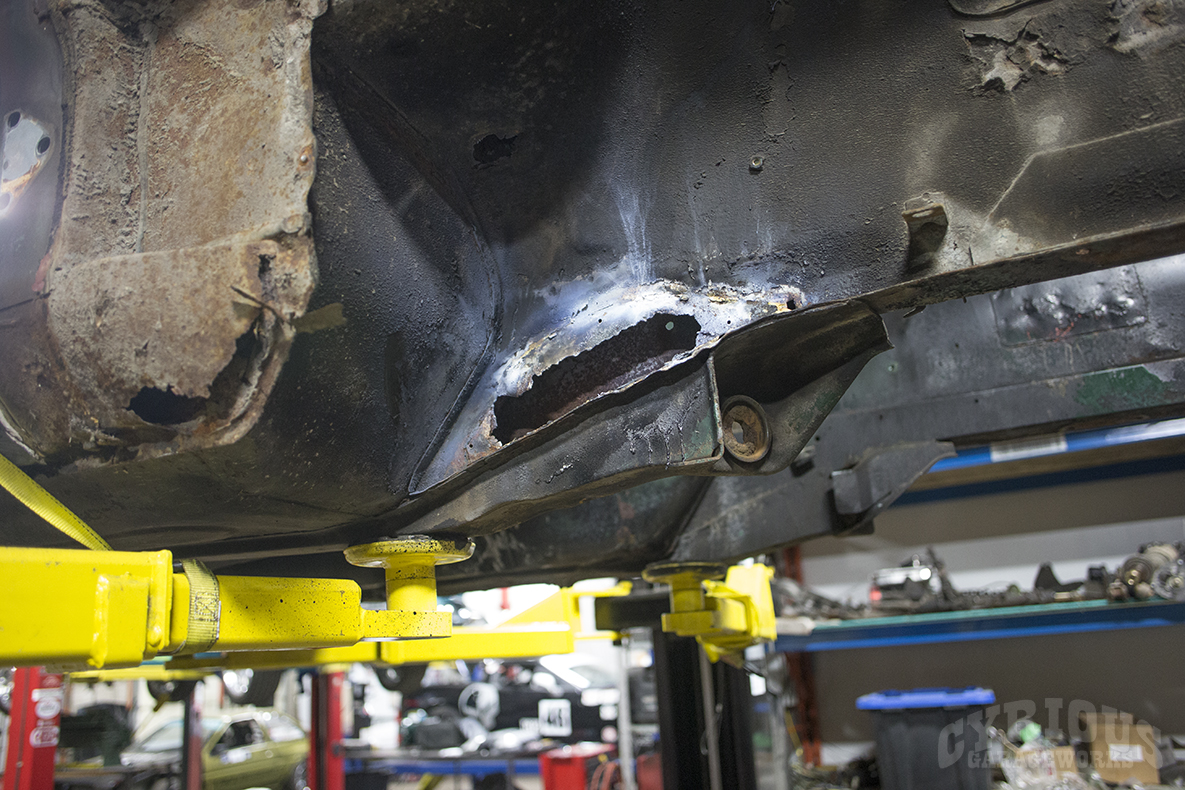 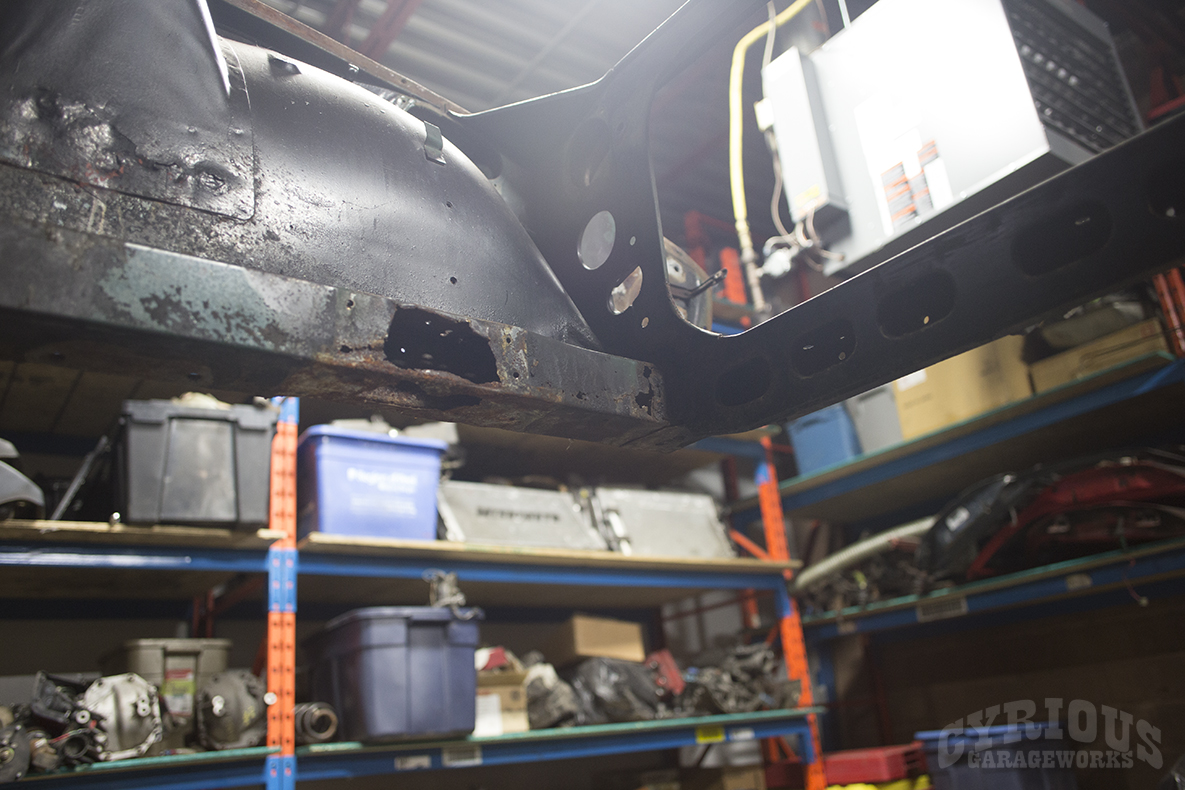 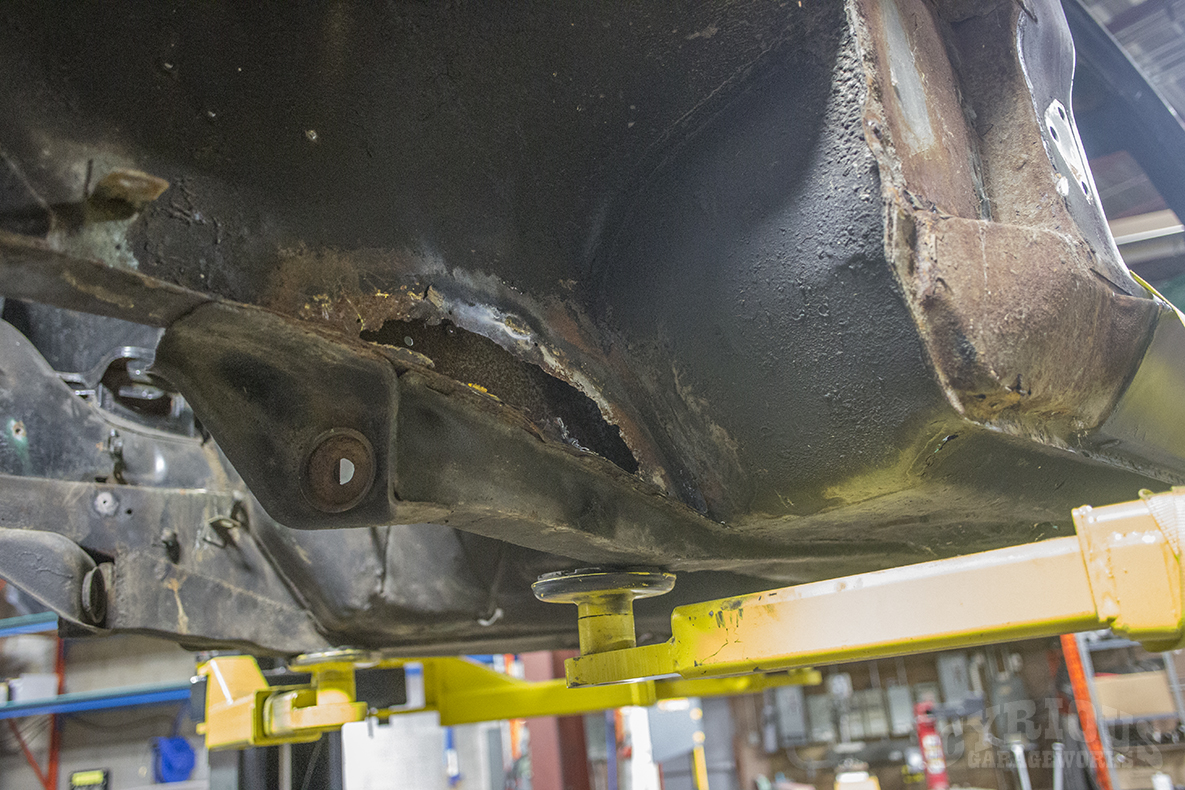 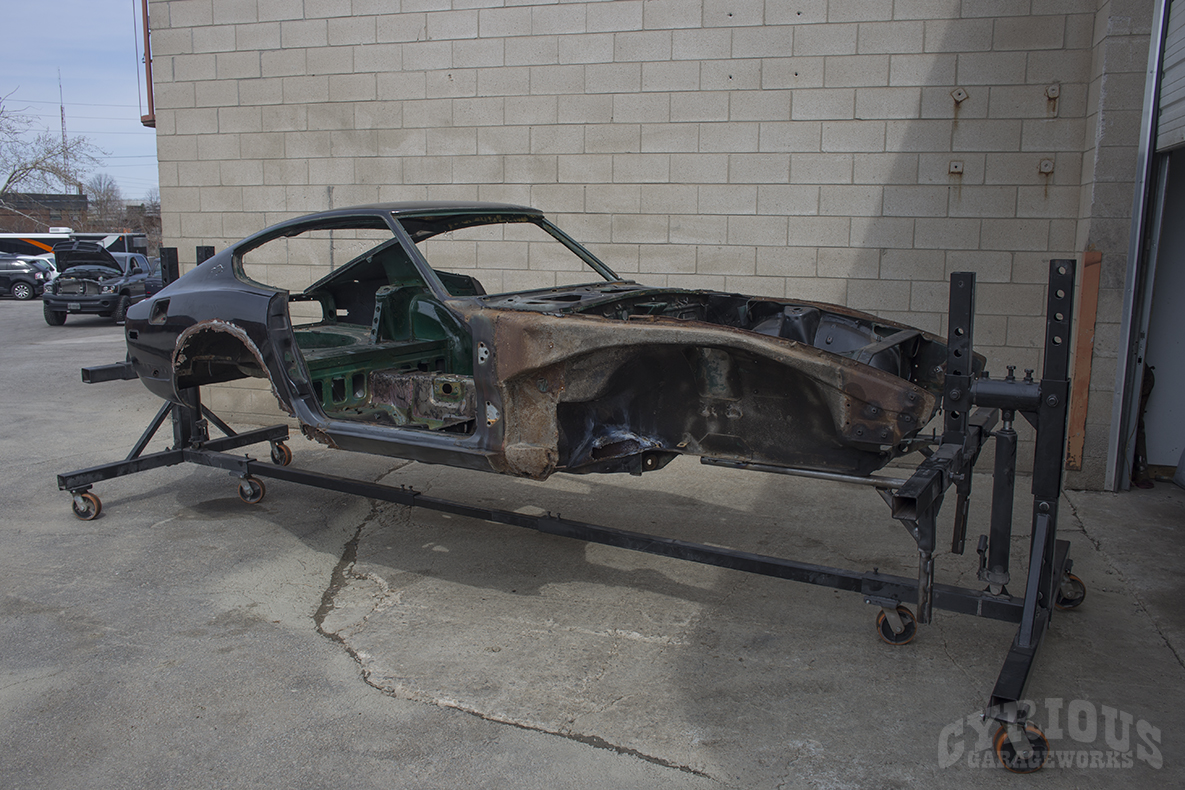 As expected, lots of body filler and rust hiding underneath that paint! If there’s a saving grace about this chassis, it appears to have not been crashed! This is actually somewhat rare for Datsun 240z’s, and was a pleasant surprise. It’s time to send this thing out for sandblasting and see if there are any other surprises hiding on this one! 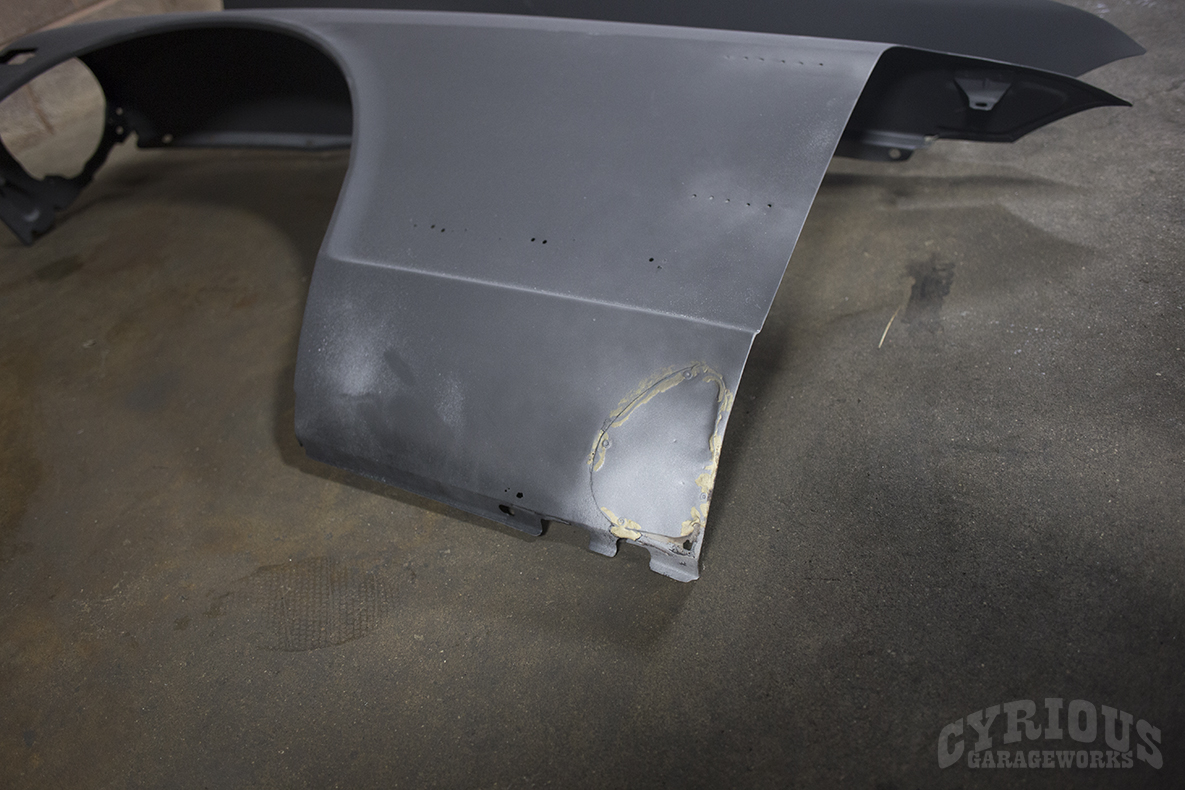 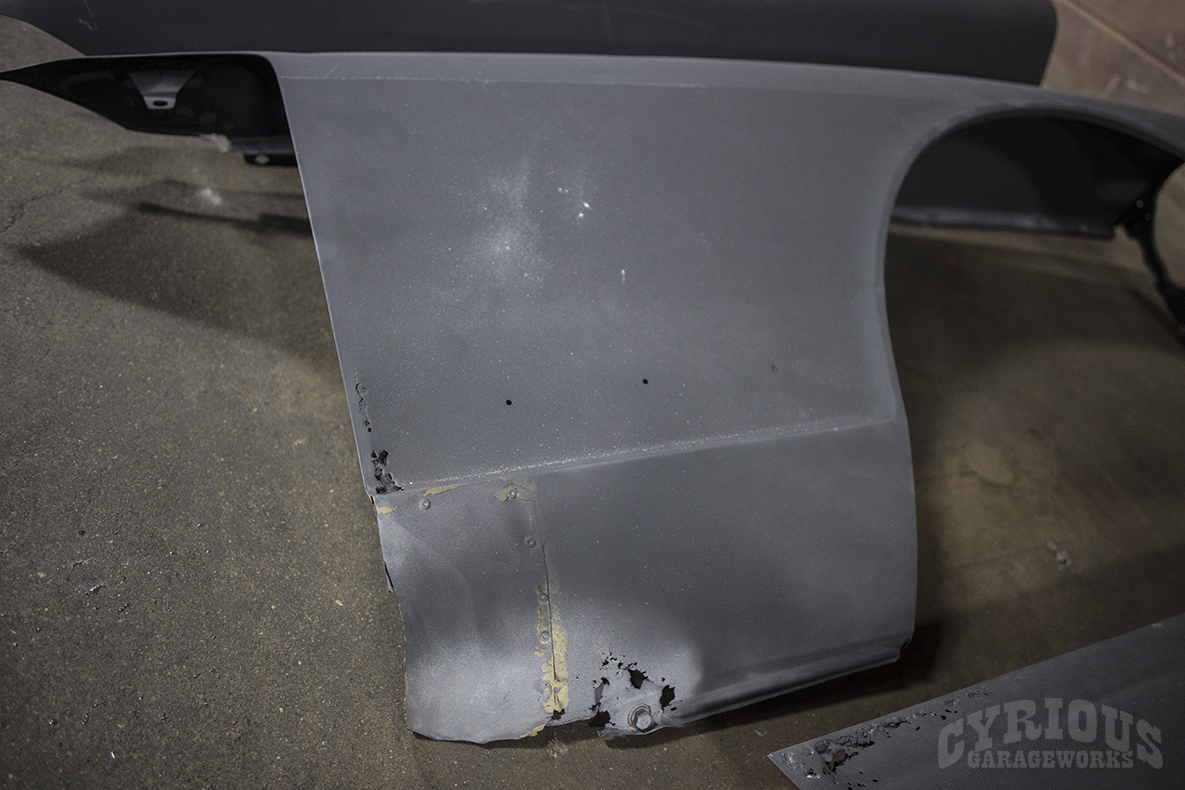 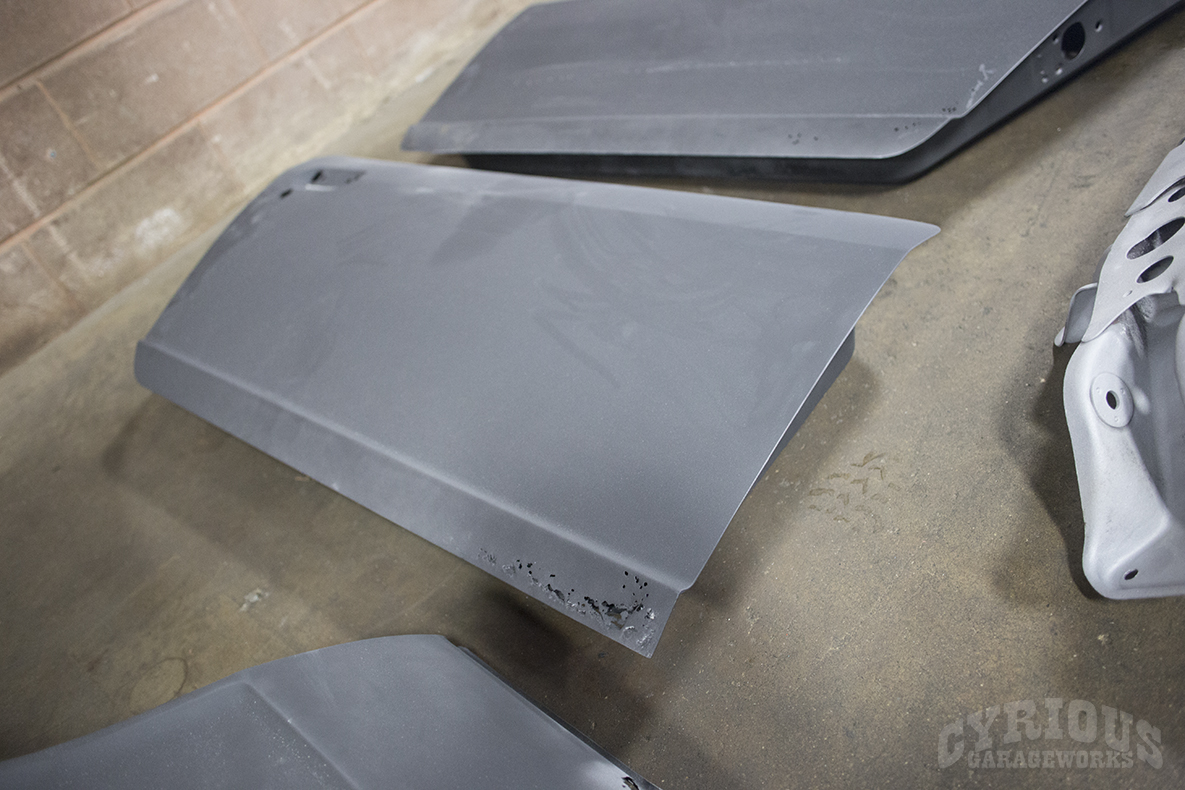 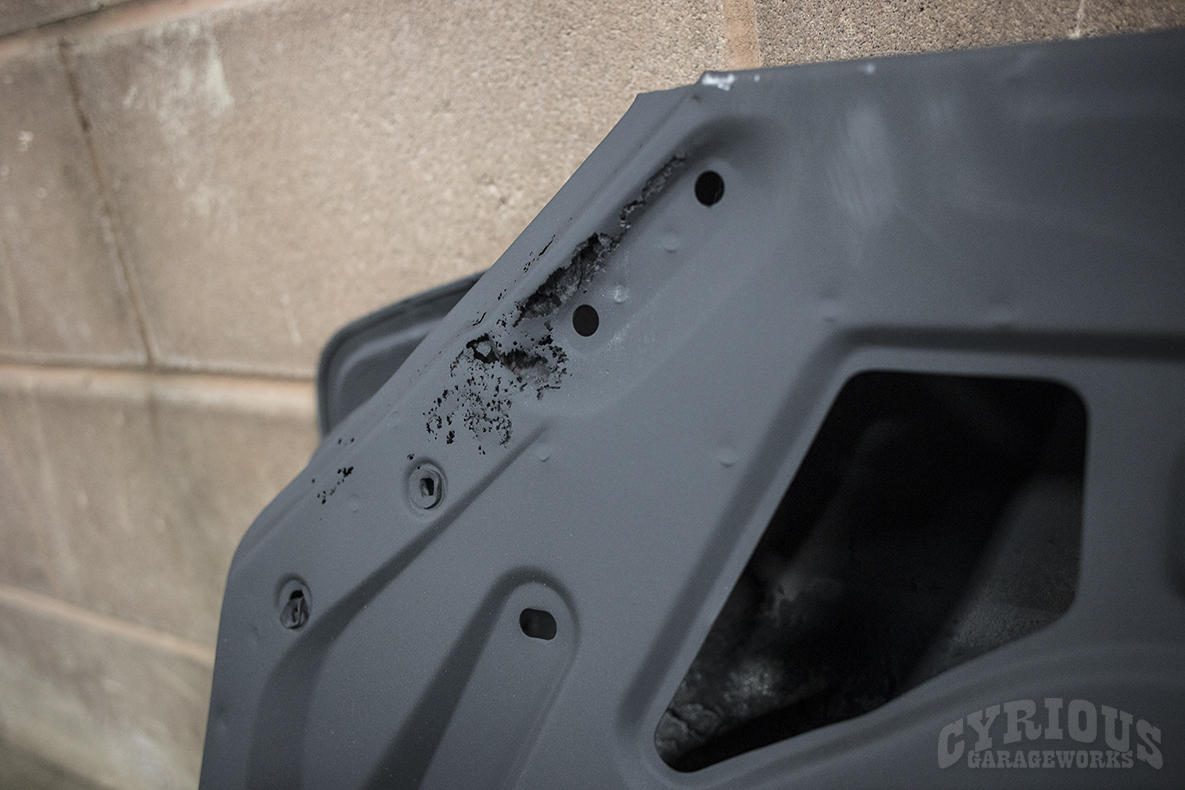 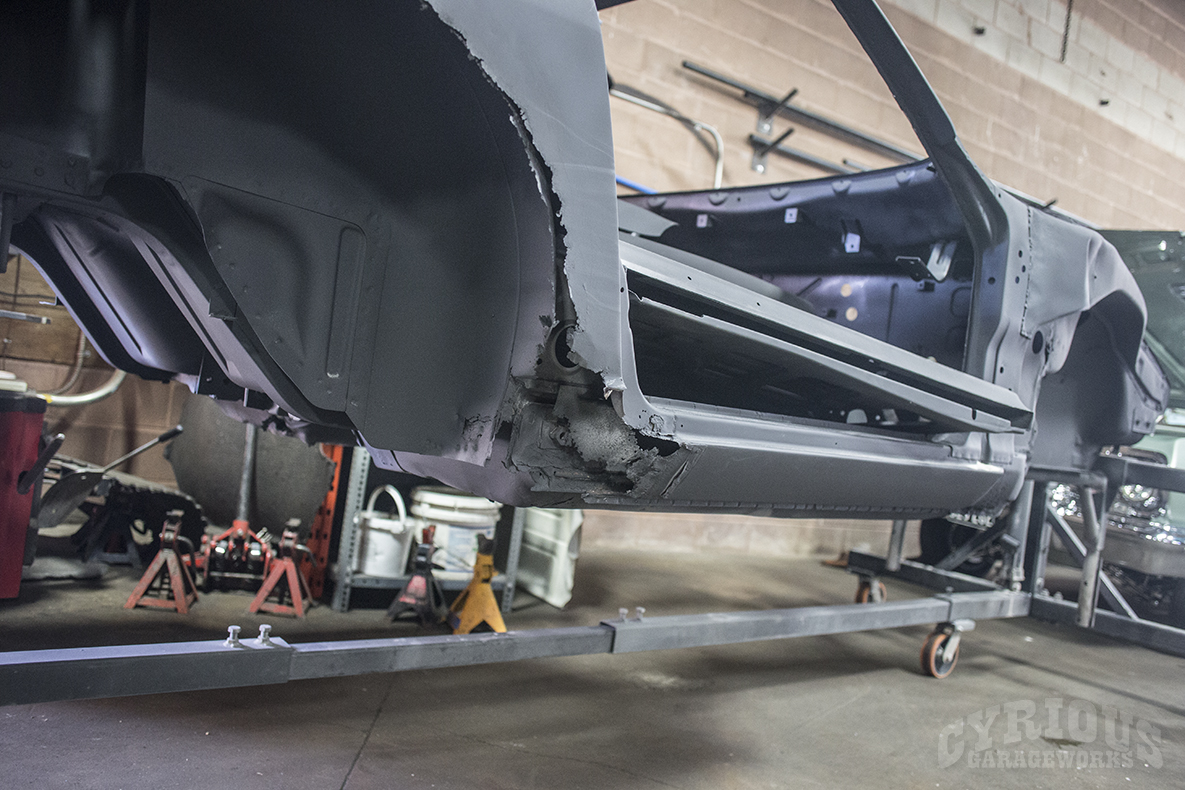 With that step complete, we now for the most part know what we’re looking at. Though we may encounter some other rusty surprises as we go along replacing metal, we’ve certainly located the worst of it and have come up with a plan of action. Needless to say, fixing a car that is as rotten as this one is no small task. Fortunately, it came to the right shop for the job! Tune in to our next post to see all of the metalwork that goes into making this car look like it did when it came off of the factory line.