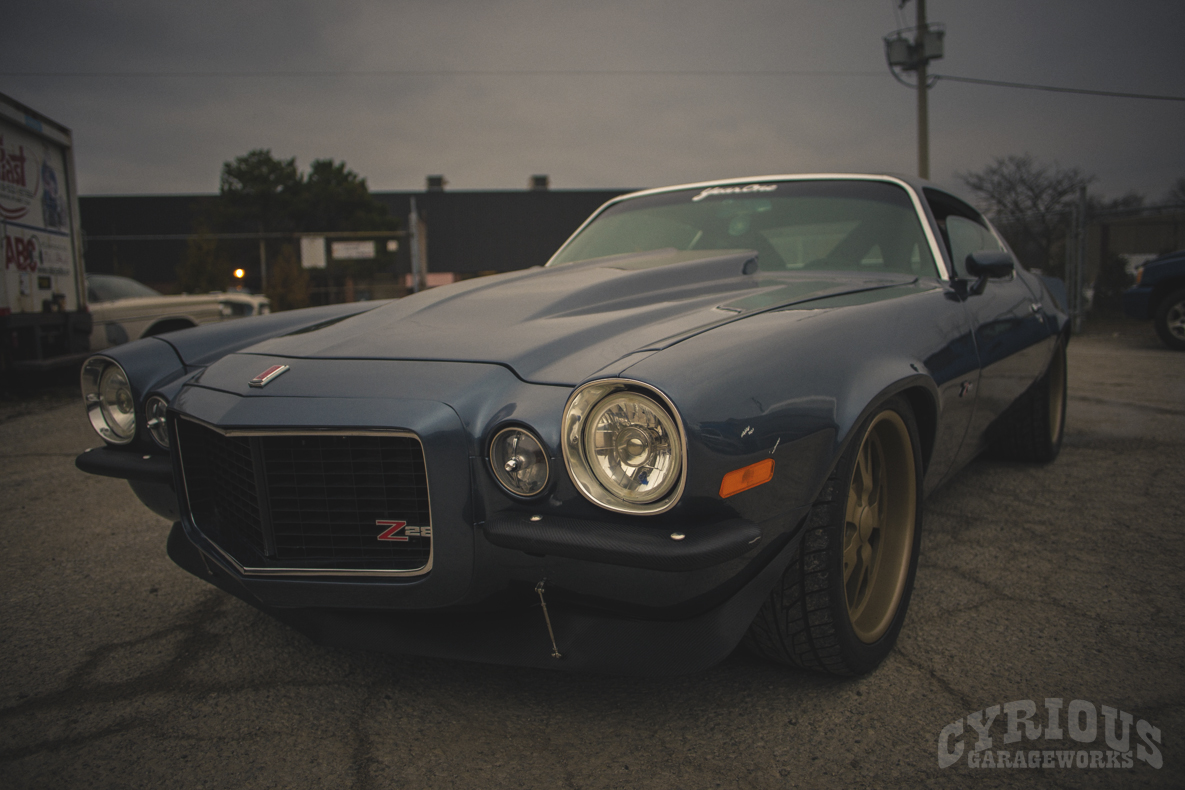 It’s not every day that you’re presented with a project created with the sole intention of taking on the entire world. That may be a bit of an overstatement, but when it came to this project aptly named World War Z, we were crossing into a territory that very few in the world, if any, have been given an opportunity to explore. Certainly there have been plenty of builds in the past that may incorporate some of the elements of this vehicle, but only a handful that put it all together; taking inspiration from Japanese car culture, Pro Touring, even racing culture, and all brought under the umbrella of Classic American Muscle. All of these inspirations come together to produce a car that can sit on the frame if you so desire, will play music wirelessly through your preferred tablet, is as wide as an F1 car, makes as much power as many professional drift cars, and will do massive burnouts on 325mm wide stretched tires without even batting an eye. But let’s not get ahead of ourselves here! We had to start somewhere, of course!

As you can see here, we started off with a pretty cool car to begin with. In terms of 1970 Camaros this one was already fairly aggressive looking and aggressive sounding in its own right. Fortunately, there are people in this world who feel that “fairly aggressive” is not enough, and Miro (the owner of this car) is one of them. Miro had some important items on a checklist: swap the motor for a 6.2L LSA from a 2013 Cadillac CTS-V, make it as wide as possible, and make it as low as possible.After much discussion about the direction things were supposed to go, our art department put together a rough sketch to help with giving us an extremely basic idea of what we were working towards. This met with approval from everybody, so we knew that we were most definitely barking up the right tree. Now all we needed to do was build it!

When it comes to doing a build of this magnitude, you’re basically rebuilding the car from the ground up, and engineering on the fly. There are no “kits” available to build this car, as just about everything from the bodykit to the power steering pump reservoir has received some amount of customizing to be fitted to this particular machine. There are still plenty of things to buy when it comes to a build like this, though, this picture only scratches the surface of the immense amount of parts that would wind up going into this build, but this is certainly a good start! Pictured here are widened rear wheel wells, as well as suspension components for both the front and rear of the car, and the air ride system.

First thing’s first, let’s get that old engine outta there! I say old engine, which may evoke images of some tired, crusty old decrepit engine with cobwebs…definitely none of that going on here, as this engine had been freshly rebuilt and had all sorts of chrome components installed. Eagle eyed readers may notice that this engine looks like the engine we used in our 1975 International Scout II Restomod, and that’s because it is!

One of the cool things about disassembling an old car is that you’ll almost always find little treasures, mostly insignificant, but every now and then you’ll find something really cool. We were surprised to find the original factory build sheet still in the car, albeit in a somewhat rough shape. After a little bit of careful archaeology to get the paper cleaned up, it did tell us that the Camaro was indeed an original Z28, and not just a regular Camaro that somebody had put the badges onto. Needless to say, we now knew that there were going to be some very angry Camaro purists out there once this car was complete. Back to disassembly!