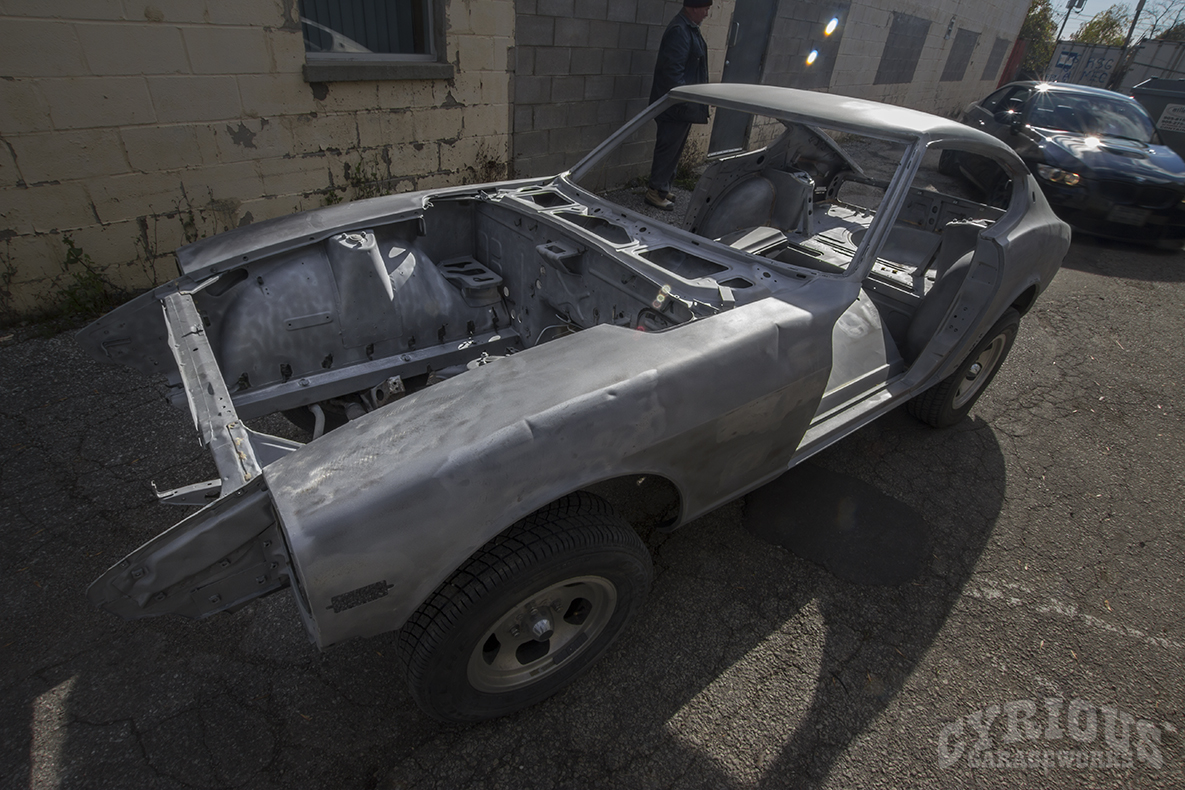 It’s been a while since we last heard from this car, so it’s overdue for a progress update! Lots of work has been completed on this build, with a little bit left to go, so let’s see where we’re at!

Our last post about this build really served as more of an introduction to the car itself before any work had been done, so we’ll go back in time a bit to cover some of the work that’s been done since then! After stripping all of the parts and interior from the car, the next step was to take the car for sandblasting and see what kind of secrets it was hiding. Overall, the car was decently clean as was expected, so our efforts of searching the southern states for a clean car were definitely justified. That being said, the car wasn’t 100% clean as we had hoped, although we were expecting for there to be a few problems. One of the main issues that arose after the sand blasting was that the car had clearly been in a bit of a fender bender at some point, and the panel was hammered out and repaired with body filler so that it looked okay on the surface. Knowing how important it would be to have the original dimensions of the car, this corner would require a lot of work to repair the damage so that the bumpers and panels match up perfectly.

The front end had also seen some kind of action in the past, with some minor damage to go along with the slight crumpling in the rear. Many of the Z cars that we looked at had similar damage, it’s really a wonder that any of these cars managed to survive the 70s, since it appears that many of their owners maybe had a bit too much fun driving them. The front gaps were fairly good from the beginning, so it’s likely that this damage was never tremendously significant, but enough that it definitely left some tell tale signs.

Overall, the body of this vehicle was in pretty good condition. There were some bits of wear and tear that are typical of a car that is 40+ years old, such as the worn out fender openings, as well as some dents and dings. The car was likely stored someplace with a window open, as there was an odd spot of rust on the driver’s side floor. Compared to what’s left of an Eastern Canadian 40 year old car though, this one was mint, so we definitely were glad to have gone south of the border to purchase this one.

The car received a coat of dark primer for a couple of reasons. The first is to inhibit any surface rust from forming on the bare metal after sand blasting. The second reason is to make it easier to spot any imperfections in the body that will be needing attention.

Restoration and reinforcement is under way! The ugly USDM side marker lights need to go, of course, along with all of the rest of the body work that must be done. As you can see, the chassis was stitch welded to add a bit of rigidity to the body. In many cases when it comes to restoring a car, stitch welding the chassis is totally unnecessary, but it was decided that it wouldn’t be a bad idea to do it on this car because…

…she would be getting a power plant upgrade! The RB26 was the first choice of engine for this vehicle, as the original motor was going to be just a bit too ho-hum for this build, and the RB almost seems like an evolved version of the L24 that we pulled out to begin with, so it’s really a great match for this car!